Ramadhan: the Month of Qur'an 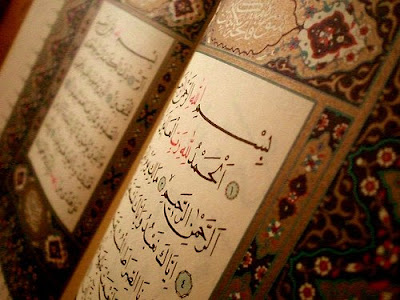 Ramadan has a special relationship with the Qur'an, of course:
"The month of Ramadan is the one in which the Qur'an was sent down, a guidance for mankind, clear proofs for the guidance, the Criterion; so whoever amongst you witnesses this month, let him fast it." (cf. Surah al-Baqarah 2:185)
The word 'so' (fa) in this ayah leads to the following paraphrase of one aspect of its meaning:
"Fast this month because it is the one in which the Qur'an was sent down."
Ibn 'Abbas narrates that "the Messenger of Allah (may Allah bless him and grant him peace) was the most generous person, and he would be at his most generous in Ramadan because Jibril would come to him every night and he would rehearse the Qur'an with him." (Sahih al-Bukhari, Eng. trans. 6/486)
This hadith contains recommendation of the following:
* Studying the Qur'an in Ramadan;
* Coming together for this purpose;
* Checking (one's memory/knowledge of) the Qur'an with someone who has preserved it better;
* Increasing recitation of the Qur'an in Ramadan;
* That the night time is the best time to recite, when other preoccupations decrease and it is easier to concentrate, as in Surah al-Muzzammil 73:6.
Further, Fatimah (may Allah be pleased with her) narrated from her father (may Allah bless him and grant him peace), who told her that Jibril would rehearse the Qur'an with him (in Ramadan) once every year, and he did so twice in the year of his death. (Bukhari 6/485)
After mentioning the above aspects of the Sunnah, Ibn Rajab talks about the situation of the Salaf (the early Muslims) during Ramadan:
"... Some of the Salaf would complete reciting the whole Qur'an during the night prayer of Ramadan every 3 days, others every 7 days e.g. Qataadah, others in 10 days e.g. Abu Rajaa' al-Atardi. The Salaf would recite Qur'an in Ramadan in Prayer as well as outside it. Al-Aswad would finish the Qur'an every 2 nights in Ramadan; Ibrahim an-Nakh would do likewise in the last 10 nights specifically, & every 3 nights during the rest of the month. Qataadah would regularly finish the Qur'an in 7 days, but in 3 days during Ramadan, when he would study the Qur'an especially, and every night during its last 10 days. Al-Zuhri would say when Ramadan began, 'It is recitation of the Qur'an and feeding of people.'

When Ramadan began, Imam Malik would cease narrating Hadith and sitting with the people of knowledge, and stick to reciting the Qur'an from its pages, while Sufyan al-Thawri would leave other acts of worship and stick to reciting the Qur'an. 'Aishah would recite from the pages of the Qur'an at the beginning of the day in Ramadan (i.e. after Dawn), until when the sun had risen, she would sleep. Zayd al-Yaami would bring copies of the Qur'an when Ramadan began and gather his companions around him. ..."
Ibn Rajab later continues,
"The forbiddance of completing recitation of the Qur'an in less than 3 days applies to this being made a regular practice, but as for favoured times such as Ramadan, esp. the nights in which Laylat al-Qadr is sought, or favoured places such as Makkah for the visitor, it is recommended to increase reciting the Qur'an to avail the time and place. This is the view of Ahmad, Ishaq and other Imams, and the practice of others indicates this too."
The purpose here is not to discuss whether or not the latter view is correct or not, since that is purely academic for most of us, as we do not get anywhere near reciting the whole Qur'an in three days! However, the practice of the Prophet (may Allah bless him and grant him peace), his Companions, and those who followed their path, should be clear enough. As a further example, Bukhari (3/79) quotes from the noble Companion Zaid bin Thabit who answered the question, "How much time was there between the pre-dawn meal and the Dawn Prayer?" by saying, "Enough time to recite fifty ayat." Since the practice of the Arabs was to measure time in terms of everyday actions, this shows that the Sahabah were preoccupied with the Qur'an, especially in Ramadan.
Compare all this with our sad state, when we talk so much about establishing Islam, implementing the Qur'an, etc. and yet have such little contact with it, maybe not completing its recitation ever at all since childhood, or perhaps never! Hence we become unbalanced in our understanding of Islam, because there are ayat which we rarely or never hear or think about; we repeat only certain selected ayat over and over again; we lost the context of the verses, the overall flow, argument and balance of the Qur'an, all of which is beautiful & miraculous. Because of this ignorance we go astray from the Straight Path, split up into sects, lose the blessings of Allah...
"We took a covenant from those who said: we are Christians, but they forgot part of the message with which they had been reminded, so we ingrained amongst them enmity and hatred until the Day of Judgment..." (Surah al-Ma'idah 5:14)
In Sahih Bukhari (6/521), there is an amazing piece of advice from the Prophet (may Allah bless him and grant him peace): "Recite the Qur'an as long as your hearts agree on it; if you disagree about it, stop reciting it (for the time being)." Studying the Qur'an should bring people together!
In Surah al-Mu'minoon (23:53), there is mention of the people before us (in whose footsteps we would follow), who broke up their Deen into sects (zuburan), each party rejoicing in what it had. One understanding of this, from the word zuburan meaning literally 'books', is that each sect left the Book of Allah and concentrated solely on the books of its own sect, so "they split their deen up into books"!
The most twisted, ridiculous, shallow ideas, innovations and superstitions are propagated amongst Muslims when they are away from the Qur'an, because any little knowledge of the Qur'an would be enough to dispel them.
Hence, O servant of Allah, leave aside secondary books and concentrate on studying the blessed Book of Allah in this blessed month (use a good translation/commentary if needed), for it is the source of all knowledge in other books, and keep away from wasting time, especially in futile discussions and arguments which lead nowhere, for that is a sure sign of being misguided, as the Prophet (may Allah bless him and grant him peace) said, "Whenever a people went astray after they had been on guidance, they were given to argumentation (jadl)." (Ahmad, Tirmidhi, Ibn Majah - Sahih al-Jami' al-Saghir, no. 5633)
Finally, remember that the Messenger (may Allah bless him and grant him peace) will complain to Allah on the Day of Judgment that his people neglected the Qur'an (Surah al-Furqan 25:30). Neglect of the Qur'an is of different levels, as Ibn al-Qayyim writes:
Not reciting or listening to it;
Not studying and understanding it;
Not conveying its message;
Not judging by it in personal and communal matters, at all levels of society;
Not believing in it.
All Praise is due to Allah, Lord of the Worlds.
Posted by tunku at 12:00:00 AM