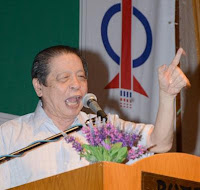 The battle for Gelang Patah Parliamentary seat in Johor is getting hotter with DAP making a 14 points declaration aimed at giving more convincing attempts to emerge as victorious.
One of the points is to alleviate the socio-economic status of the Indians, which is seen as a ‘ploy’ given that the Pakatan Rakyat (PR) manifesto did not even mention anything about the community.
The Indian community, majority of whom had abandoned MIC, its representative in the Barisan Nasional (BN) coalition ion 2008 general election and voted for PR, is now crying foul as the PR-led states have neglected their grievances if not existence.
Announced by none other DAP advisor himself Lim Kit Siang who is contesting the seat, Lim’s attempt is seen as ‘a desperate attempt in the final assault’ to clinch every single vote he can from the 100,000-odd voters.
It comprises of 54.3 percent Chinese, 33.85 percent Malays and 11.7 percent Indians and the constituency is an urban seat.
Gelang Patah seat is held by MCA Tan Ah Eng when he won it in 2008 general election with a majority of 8,851 votes against PKR’s Zaliha Mustafa.
Given the majority won by MCA in 2008, Lim sees that ignoring the Indians would be fatal for him if the Chinese do not give him a hundred percent support and hoping for PKR and PAS members and supporters to throw their support would not be sufficient.
The declarations that is considered as a ‘sandiwara’ by MIC Youth chief T. Mohan, similar opinions are also expressed by members of BN coalition parties.
Former BN assemblyman for Templer Park in Selangor Datuk Ahmad Bahari Abdul Rahman questioned why was it that DAP did not come out with policies on marginalized Malays and amrginalised Chinese?
“Since this is not contained in PR manifesto, is the DAP doing this without PR’s approval just to win the Indian votes and will the declaration be fulfilled after winning the seat?” he asked.
Given that PR through the DAP is attempting to make a ‘dent’ or if possible penetrate the Umno bastion, Gelang Patah will see a vigorous battle that is considered as a ‘do or die’ battle for Lim in his career in politics.
Former Prime Minister Tun Dr Mahathir Mohamad has already set foot there to defend from the push of Lim’s assault.
Dr Mahathir had called on the voters there to bury Lim’s political career.
However, given fact that majority of the voters are Chinese, Lim may just stand a chance to win as the voters may still want a vocal representation in Parliament.
Or will Lim end like the Tanjung project in 1999 where he lost to Gerakan’s Koh Ksu Koon.
Posted by tunku at 10:22:00 PM