Women of Excellence Awards 2014 to aspire next generation 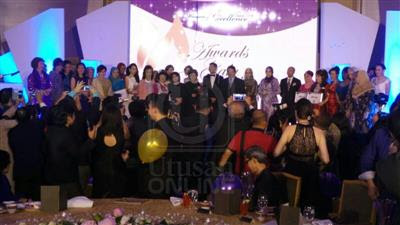 The achievement of Malaysian women needs to be celebrated so that it will inspire the next generation of women to strive for greater heights of success.

This is the resounding theme for the inaugural Women of Excellence Awards 2014, held to honour the nation’s women who have met with great success in their respective fields.

AirAsia Bhd chief executive officer Aireen Omar , one of the nominees for the Awards, told The Star that the recognition given to the nation’s women through the awards helps women to become aware that their contributions to the country do not go unnoticed.

“It helps in the sense that it promotes awareness to women in the society that the society do recognise their contributions and it will be an encouragement for them to ensure that they (continue to) do the best that they can,” said Aireen Monday.

Co-founder and group strategist of Centuries Group, Mi-Ki Choong echoed Aireen's sentiment that the Awards serve as a motivation for both recipients and other women to strive for greater success.
"(It gives a message) that it is important to have goals and dreams in your life to pursue it," said Choong.
Co-founder of The Actors Studio Datuk Faridah Merican, another nominee of the Awards, said that she is moved to have been nominated as achievement in performing arts is not given as much attention in the country as other fields of achievement.

Faridah however said that the women are well represented in the field of performing arts in the country.

“Women are doing well in the arts (in Malaysia) and we do not feel as though men are putting us under their thumbs,” she explained.

Federal Territories Minister Datuk Seri Tengku Adnan Tengku Mansor recognised the struggle that women worldwide are still facing in the road to success, including battling stereotypes ingrained in many cultures, his opening speech at the Awards.

“Women (need to) fight every single day to break this undeserved mentality and challenge people to accept their capabilities,” he said, adding that the Government must improve on women’s representation in society, especially in the labour force.

Other recipients of the Awards include Tun Dr Siti Hasmah Mohamad Ali and Datuk Siti Nurhaliza Tarudin.
Posted by tunku at 11:02:00 AM