The Battle of the Races or the Battle Within One Race?‏ 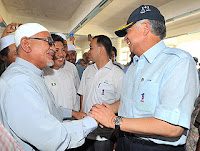 The war of the political parties is barely ended by the GE-13 but another battle is already taking shape.  If the GE-13 could be referred as a war between the Chinese and the Malays, this new war is between the neo-liberal Malays and the ordinary Malays.

The neo-liberals are referred to those being born in silver platters, served with silver spoons and having blue blood flowing in their veins.  Their mums and dads and grandpas and grandmas usually belonged to the group of elites – the big-shots and royalties and their counterparts from the days of the British colonization.   Ironically, these elites are also the pioneers of UMNO who fought with their hearts and souls for the Malays and Independence.

But we learned now that nationalism and patriotism aren’t something that can be inherited.

Today, the sons and daughters or grandsons and grand-daughters of these elites somehow had missed the points in their older generations’ struggles and fights.  Having access to further education and the world, these new generations of the elites almost definitely would become successful.  They went overseas and came back as lawyers, doctors, professors, accountants and quite a number of them, joined the GLCs.

In the meantime, the Chinese and Indians who have been given easier access to education by the British, continues to prosper and advance along with the elite Malays.  And so, the non-Malays and elite Malays become friends, best friends and buddies in schools right to universities.  The elite Malays who are naturally naïve and lack of surviving skills, believe with all their hearts that these non-Malay friends of theirs are really, truly good friends and as naïve and as true as they are.

The ordinary Malays, however, are forced to continue to struggle for a better life, struggling even to master English with very little exposure to the real world.

Fortunately, there is New Economic Policy (NEP), which was set up, mainly by the older generation of the elites who most naturally were then, the leaders of the country.

The policy proved to be successful in helping the ordinary Malays to stand as tall as today.   It managed to create talented engineers in mechanical, electrical, electronics, as well as highly qualified financial or business or marketing managers and strategists.  Latest, we also see the newer generations that had benefited from the NEP having the chance to achieve their dreams of becoming geologists, IT or graphic engineers and exploring new technologies such as nanotech, biotech and the sorts.

Unlike the new generation of the elites who ended up opening their own firms or joined the GLCs and become successful people, these new generations of smart, ordinary Malays usually ended-up in private sectors as working class people.

Of course, there are also those who joined the government sectors and also politics – from both ordinaries and neo-liberals, either by choice or by ‘no-choice’, but being in the same sectors doesn’t mean that these two groups are able to ‘see eye-to-eye’ in many aspects of life.

The elites who joined the government sectors usually end-up as high ranking officers or even Ministers and Senators but never at the bottom, while the ordinaries, end-up everywhere from top to bottom.

These two groups of Malays remain skeptical and prejudice over one another.  The ordinaries look at the neo-liberals as traitors, even lost souls who failed to stay connected to their roots that they finally lost touch to the ground.

But the truth is that these neo-liberals are trapped in the colonial days where they continue to worship everything that looks, smells and sounds ‘western’.  They are so insecure with their own roots that they need to impress their non-Malay friends in order to be accepted.

If they have to sip wine to fit in, they would.  Then they would make themselves believe that, that it is what is called ‘open mindedness’ even ‘successfulness’.  They refused to acknowledge their culture and language as that would mean backward and stupid like their fellow brother of the ordinary Malays.

The neo-liberals are forever unaware or pretend to be unaware of the facts that their non-Malay friends are only nice to them because they are deemed as ‘usable’ or  ‘necessary’ in order to secure government projects.

As hurtful as this may sound, I’m sure deep inside the hearts of the neo-liberals, they know for a fact that the non-Malays have never respected them in a true sense. The neo-liberals are being labeled by their non-Malay friends as government cronies and that their success is not genuine for they didn’t have to work as hard as their counterparts from other races.  They are also being laughed behind their back by the non-Malays for so easily manipulated by compliments and fake respect.  The non-Malays see them as ‘stupid’ for very willingly sell off their own brothers and sisters, even disown their culture and language for the sake of ‘fitting-in’ with the more successful race.

We feel sorry for the neo-liberals for they really think that they are being highly regarded by society, while the fact is that they are the lowest possible kind there could ever be in any race – they are the real pariahs.

If only they take some time and ask why their non-Malay friends are only nice to them, but not to Syed Mokhtar AlBukhary or to ‘Mydin’ who have proven to be more competent and being listed among the most outstanding Malaysians, then they would know that they are not as smart as they think they are.

Now, this is a fact that the neo-liberals would never dare to ponder:-  Should they come back from overseas and worked in private sectors, they would find that they will never have a chance to soar as high, because they would be brushed-off as incompetent by the non-Malays who hold the top management posts, no matter if they are the most hard-working and smartest employee there is.  And bear in mind that even if the top management are the neo-liberals’ best buddy in school, the loyalty of the non-Malays are to their race first, not friends.

Be informed that the non-Malays would never give the Malays a fair chance, what more dare to compete on a level-ground because they are never as ‘kind’, ‘open-minded’, or ‘unracists’ as they claimed to be.  And they know for a fact that the ordinary Malays, if given chance, would be able to soar higher and their success would be genuine which could be a real threat to the non-Malays’ share of the economic cake.  This is because, the ordinary Malays are not as naïve or easily misled and manipulated like the neo-liberals into giving up their everything.

And this is ‘the’ fight that we have to face.  That is, the fight within ourselves and our race – the Malays.  The fight to rid of the insecurities and stand tall as our true selves without shame.  The fight to understand that the real shame lies in the inability to accept own roots, and not otherwise.