Where Is Kedah's Hudud Enactment? 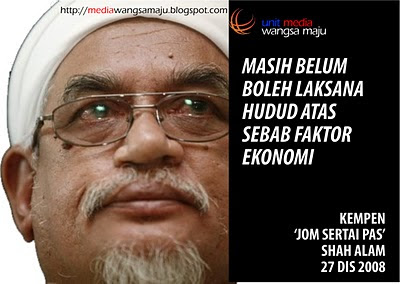 Soon after winning the state of Kedah during the 2008's General Election, Bernama (March 9, 2008) reported the statement made by the President of PAS, Datuk Seri Abdul Hadi Awang who plans to implement Hudud in Kedah. He said, it is under the power of Kedah government.
But, there were no follow-ups made among any PAS leaders regarding the implementation of Hudud law in Kedah after the report. Only after a term, hudud is now again become the matter of discussion in Kedah through the report on statement made by Kedah Chief Minister, Dato’ Seri Azizan Razak, in Sinar Harian (July 5, 2012) saying that he leaves all the decision on hudud to PAS. This is regarding the Pemandu Committee by PAS, to monitor PAS's administration in Kedah.
If PAS Kedah wants to implement hudud, it is not difficult because there are only 3 non-Muslim excos for Kedah's administration, and only one of them is from DAP who strongly rejects hudud.
It is clear that PAS Kedah is just as same as PAS, they have never even planned to implement hudud. Instead, hudud is just their supporters' dream who are dumb enough for unable to understand the game that is being played by their leaders.
According to history, when PAS won Terengganu, the party did discuss about implementing hudud but it was rejected by the central government because there are dozens of enactments that clashes with Islamic teachings.
Few of them include laws that says it is permitted to commit sodomy to wives, non-Muslims can be appointed as Judges for hudud laws and other matters which involves qazaf which involves four witnesses for adultery where if a witness pulls off, so the other three witnesses can be charged.
This matter was raised by Dato’ Zulkifli Nordin in the Dewan Rakyat back in 2011.
What is more interesting is that when Dato’ Zulkifli mentioned about a rumor he haerd about mistakes and clashes in Islamic teachings within hudud which was presented by PAS was actually done on purpose. It was done to ensure that Tun Dr. Mahathir, who was then the current Prime Minister to reject it, hence creating a chance for PAS to accuse him and UMNO for rejecting hudud.
If that is true, it seems that PAS is not just cunning, they are also ill.
It is a good thing that PAS Kedah did not become as cunning as Terengganu by presenting a weak hudud enactment just to tarnish the government's image. Instead, PAS Kedah is not even interested to play along with PAS because they are more interested in adding entertainment centres around the city of Alor Setar.
Posted by tunku at 9:11:00 PM