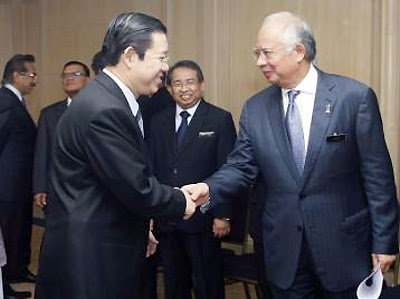 Dr Chua: DAP's ultimate aim is to knock out MCA and join BN

YONG PENG: DAP's long-term political agenda is to join Barisan Nasional in a bid to protect its supreme position in Penang, said MCA president Datuk Seri Dr Chua Soi Lek.
“DAP politicians are like any other politicians, for them it is the thirst for power.
“Penang has limited resources and how long can (Penang Chief Minister) Lim Guan Eng tender his land?" Dr Chua said, adding that the DAP hoped to see the MCA disappear and be replaced in Barisan.
He urged the Chinese community not to be conned by the Opposition party.
“The DAP ultimately wants to be in the government like in Penang and now they hope to be the government at federal level,” he said.
On the opposition making Johor their frontline in the next general election, Dr Chua said in a multiracial country like Malaysia every race must work together to continue to develop and move forward.
"I would like to remind the Chinese community, if you support the DAP thinking that the Chinese are the King maker' then you are wrong,” he said.
In Johor, Dr Chua said if the state government were to fall to PAS, many projects under the government transformation programmes such as as well as oil and gas hub development in Pengarang would be affected.
“The projects which amounted to RM90bil will come to a stand still as PAS doesn't pay a lot of attention on social and economic development,” he said.
Dr Chua also rebutted Lim, who is DAP secretary-general, that Umno wanted to impose Hudud law for Muslims and non-Muslims.
"Prime Minister Datuk Seri Najib Tun Razak has already said it very clearly that Umno will not implement hudud.
"None of the Barisan states even think of amending its state constitutions to implement hudud,” he said.
Dr Chua said Kedah has also openly indicated that it would follow Kelantan's footstep if it implemented the Islamic law.

tunku : very interesting point by CSL. it's not impossible that DAP will try to join BN when they have more seats than MCA. this is because PAS and PKR won't be able to help DAP form a government at federal level. the chinese voters should back MCA which all these while working hard for the community rather than DAP which talk more than action. don't be fooled like CSL said that you won't be the "King Maker". you have to accept the reality.
Posted by tunku at 12:00:00 AM