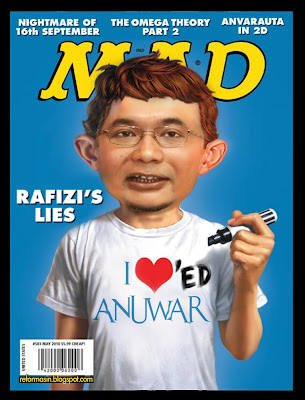 Pakatan Rakyat's election pledge will include abolishing excise duties on cars to reduce household debt and increase disposable income.
According to PKR strategies director Rafizi Ramli (left) , a whopping 72 percent of households currently own cars and are paying almost double the actual value of the vehicle due to excise duties.
He said this was an easy and viable strategy to increase household income, which is among Prime Minister Najib Abdul Razak's main goals.
"Between raising household incomes and reducing outlays (on cars) which improves a household's disposable income, any economist will tell you its easier to reduce outlays," he told a press conference.
tunku : when you are not in power you can make promises that is beyond your capabilities. that's why till now there are many promises made by the pakatan's during last election can't be fulfilled. pakatan now pledging lots of fairy tales promises to the people. demolish this , demolish that, no toll, free tertiary education and now the latest is to abolish excise duties fro the cars. one BIG question is, if all the government's income are being reduced, how the government will spend on it's expenditures? what will happen to our economy? then again proton will surely die and thousands will be without job. the people should not fall into opposition's empty promises. they will ruin this country's future.show the exit door to them.
Posted by tunku at 2:10:00 PM