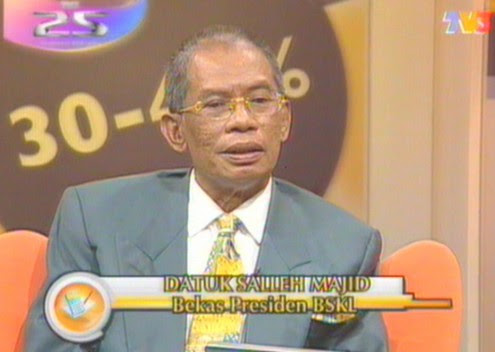 KUALA LUMPUR, Jan 2 (Bernama) -- The late Datuk Mohd Salleh Abdul Majid was today hailed as a leader who made extraordinary achievements while helming the Kuala Lumpur Stock Exchange (now known as Bursa Malaysia) besides championing the Malay economic agenda.
Former Bernama general manager Datuk Seri Azman Ujang, who often covered economic news when he was with Bernama's editorial team, said share prices when Mohd Salleh was heading the exchange (from 1996 until his retirement in 2003) kept going up unlike now.
"That time, share prices were skyrocketing and there were even cases where the share price of unknown counters reached up to RM140. Now there are shares which are even cheaper than a roti canai (average price RM1), and not going up.
"That was the situation during Mohd Salleh's heyday," said Azman, who was Bernama's Editor-in-Chief before being promoted as its general manager.
He added that one of Mohd Salleh's aspirations was the formation of an Islamic stock exchange involving the participation of several Arab countries and Malaysia.
Meanwhile, Malay Businessmen and Industrialists Association of Malaysia (Perdasama) president Datuk Moehamad Izat Emir said Mohd Salleh was a very consistent person and a decisive leader.
"I hope someone will compile his thoughts into a book," he said in commenting on the death of Mohd Salleh, 62, who died at the Kuala Lumpur Hospital (KLH) of rectal cancer and renal failure at 10.20am Monday.
Perkasa (a right wing Malay movement) president Datuk Ibrahim Ali described Mohd Salleh's passing as a big loss for the Malays, saying he had been relentless in his effort in pushing for the Malays to advance economically.
"We studied together at the Mara Institute of Technology (now Universiti Teknologi Mara) but he was more inclined to economics than politics," he said, adding that Mohd Salleh was a very humble and moderate person.
According to Mohd Salleh's younger brother, Ibrahim Abdul Majid, 60, Mohd Salleh had been suffering from kidney problems since the 1990s.
"My brother had been in and out of hospitals several times and was warded again at the KLH on Tuesday," he said.
A daughter of Mohd Salleh, who did wish for her name to be published, said Mohd Salleh was a loving father and always made time for the family despite his busy schedule.
Mohd Salleh's remains were buried at the Ar-Ridhuan Mosque Muslim Cemetery, in Hulu Kelang here this afternoon.