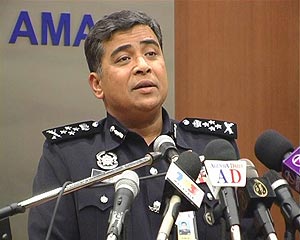 The government views seriously the death threat made by a group of youths on Inspector-General of Police (IGP) Tan Sri Khalid Abu Bakar on social media.

Deputy Prime Minister Tan Sri Muhyiddin Yassin said such threats could lead to bigger dangers to the nation in future.

He said three steps must be taken to contain the threat of extremism, including through education, to provide an understanding about security to the younger generation.

"Secondly, the existing laws need to be implemented effectively, and thirdly, cooperation among the public to help the authorities take the appropriate steps.

"We cannot take this lightly because today, extremism is a global issue....some of our people are involved with the IS (Islamic State), which is clear proof that it has already happened in Malaysia," he told reporters.

He was commenting on a 1:27 minute video showing three masked men who called themselves Anak Malaysia Anti Demokrasi (Amad) which went viral on the social media, threatening to blow up the IGP's car.

Another video earlier showed four men saying they planned to burn fireworks at all the courthouses throughout the country on Feb 18.
Posted by tunku at 8:09:00 PM