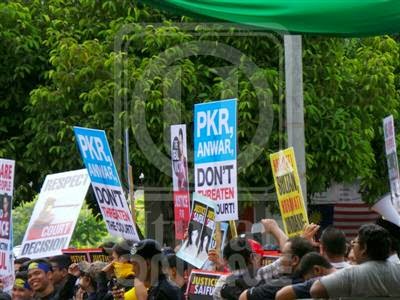 Wearing a black suit, Anwar arrived in court at 8.55am, accompanied by his wife PKR president Datin Seri Dr Wan Azizah Wan Ismail and their children, including Lembah Pantai MP Nurul Izzah.
The courtroom was packed with local and foreign press, as well as members of the public.

On Jan 9, 2012, the High Court acquitted and discharged Anwar of sodomising Mohd Saiful, 27, on grounds that the court could not be 100% certain on the integrity of samples taken for DNA testing from the alleged victim.

The court had ruled that the samples could have been compromised before they reached the chemistry department for analysis.

However, on March 7 this year, the Court of Appeal overturned the high court’s judgement and found Anwar guilty of sodomising Mohd Saiful.

The Court of Appeal held that the trial judge had erred in his findings about the samples which were based on the evidence of two expert witnesses called by the defence.

Anwar was sentenced to five years’ imprisonment for the offence allegedly committed at Unit 11-5-1 Kondominium Desa Damansara, Jalan Setiakasih in Bukit Damansara between 3.10pm and 4.30pm on June 26, 2008.

The charge under Section 377B of the Penal Code, carries a jail term of up to 20 years and whipping, upon conviction.

This is the second sodomy case against Anwar.

In the first case, he was found guilty of sodomising his family’s driver, Azizan Abu Bakar, at Tivoli Villa here in 1994, and was sentenced to nine years’ jail by the High Court on Aug 8, 2000.

The court ordered him to serve the sentence after the completion of his six-year jail term for corruption; Anwar was found guilty of four charges of corruption on April 4, 1999.

After spending nearly six years in jail for corruption, he was released on Sept 2, 2004, after the Federal Court led by Justice Tun Abdul Hamid Mohamad, who went on to become the Chief Justice, overturned his conviction and set aside Anwar’s jail sentence on the sodomy charge, in a 2-1 majority decision.
Posted by tunku at 11:09:00 AM