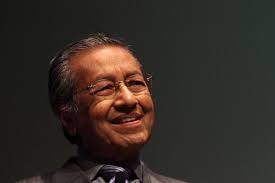 The statement by Ikatan Muslimin Malaysia (ISMA) president Abdullah Zaik Abd Rahman on the Chinese in the country has been termed seditious and not constructive by former prime minister Tun Dr Mahathir Mohamad.

"He (ISMA president) is not helping (to preserve) peace in this country. It (statement) is not going to do any good to anyone or the country."

He was earlier asked by reporters to comment on Abdullah Zaik's statement on the organisation's website www.ismaweb.net which described the Chinese who were brought to the Malay States by the British colonialists as "trespassers" and who forgot themselves.

"The Malaysian Chinese are citizens and they have rights in this country. We don't want people to start a racial riot. Therefore, ISMA's statement is not constructive," Dr Mahathir said.

Asked on ISMA's statement that hudud should also apply to non-Muslims, he said they (ISMA) should read and follow the Quranic verses properly as the Holy Book stated that "God does not like people who create turmoil".

On the militant activities in the country, Dr Mahathir said: "I think these people (militants) are misled. They think they are doing something in accordance with the teachings of Islam. I think this is all wrong.

"Muslims are supposed to embrace brotherhood. They need to respond to the feelings of other Muslims," he said.

Since April 28, police have detained 12 people believed to be involved in militant activities in Kedah, Selangor and the federal capital through a militant network in Syria and southern Philippines.

Police believe the militants received training in Syria with the rebel group that opposed the Bashar al-Assad government.
Posted by tunku at 5:55:00 AM

On this one I don`t totally agree with you.

The Malays have always been asked to look into multi racial sensitivity but the Chinese never really cared.

No way we have to apologize everytime! Those who provoked should be responsible. Enough is enough!

Sorry Tun, and so do i, be real, afterall constructive statements is only applicable in a positive political atmosphere.., with Malay and Islamic bashing going on for more than 10 years since 1998, what do you expect,... infact Malaysian should be grateful that the middle ground Malay have been tolerating this for a very long time, who do you think that keep the BN alive till now?... but then.. regret to note that, UMNO as the leader is not sensitive on this..

I ageed, the chinese are really trepasser and Tun is not wrong to say that but i think when it comes from a malay its seditious.So I dont think its fair to say its seditiouss, becoz a malay say it.

Anon 10:49 am,
It's not about when others said it means we should do it too. This is a matter of principles. ISMA is more like Taleban's mentality. Asked for a stupid PAS' hudud and racist at the same time. How extreme is that? And you want to agree with them? On what basis? Supporting the stupid hudud or just whacked the Chinese because they were racist too? What is your principle? Have one?

Mahathir can smell these kind of terrorist 's mentality from far away. Who are you smart ass to compare to Mahathir?