The 700 million extra fund: What is the motives behind Azmin’s tantrum? 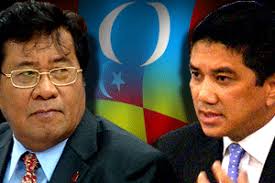 The feud between the Mentri Besar of Selangor, Tan Sri Khalid Ibrahim and Bukit Antarabangsa State Rep Azmin Ali is stale news. We are sure that everyone in PKR knows about this story.

This is all because Azmin’s failure to obtain the Menteri Besar post and he was forced to accept Khalid Ibrahim as the Menteri Besar of Selangor. We don’t want to elaborate more on this situation because we know that it would be just another melancholic drama by these two head honcho of the Pakatan Rakyat.

Whatever happens, things like this should be left alone, and it should not be brought into the state assembly hall as it does not affect the people of Selangor at all.

All of us knows that according to the consensual rule of the house, a PR state rep must always support and vote for anything that is stated by the Selangor state government. The state asks for the hall to pass an allocation of RM 700 million but it was queried by Azmin Ali. This particular incident happens yesterday at the State Legislative Meeting.

Azmin was blasting Khalid Ibrahim like there is no tomorrow, everything that came out from the mouth of Khalid Ibrahim was shot down by a much better point and substance by Azmin. This is democracy so to speak but can’t Azmin just play along and ask Khalid Ibrahim in private on the issue at hand?

We are sure that the 12 BN state rep are laughing their hearts out during the verbal catfight between Khalid and Azmin.

Action like this will weaken the state government. As a supporter of the “new hope for the rakyat” we all know that we managed to capture Selangor not because we are strong, but we are clever enough to switch our voters in certain location. We used the Chinese as our pawn in order to defeat the Barisan Nasional.

The fact of the matter is, there are a lot of seat that PAS and PKR won are in danger in the upcoming 14th general election if nothing is done now.

And these open fights between party members cannot help the Pakatan Rakyat at all.

What we afraid of is that the verbal sparring session yesterday are only the tip of the ice berg. It starts with the leader first and later the supporters and party members will join in. We have to remember that most of the state rep for PKR in Selangor is Azmin’s men.