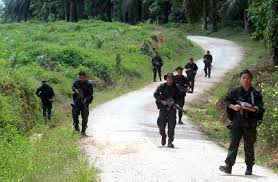 A military camp is to be built at Felda Sahabat in the east coast Lahad Datu district not far away from the site of the Sulu gunmen intrusion last February.

The security boost was among the three priority areas for Sabah, the Prime Minister said at the breaking of fast with state Barisan Nasional component party leaders and members here Saturday.
He said the other thrusts for the state was accelerating development programes especially in rural areas apart from safeguarding the people's welfare and interests.

''In terms of development we realise Sabah has to play a catch up game. We want to see the development gap between the state and peninsula being reduced," Najib added.
''We will give due attention to Sabah and provide the necessary financial allocations within our capacity,'' the Prime Minister said.

Voicing his gratitude to Sabahans for giving the Barisan Nasional 22 of the 25 Parliament seats, Najib said the people had displayed their political maturity.

''Sabahans have shown that it is not simply a matter of changing the government but changing the lives of the people and this is what Barisan has done and will continue to do,'' Najib said.
Posted by tunku at 1:26:00 AM