Strategy To Clash Tun M-Najib: Proves That PR Is Scared 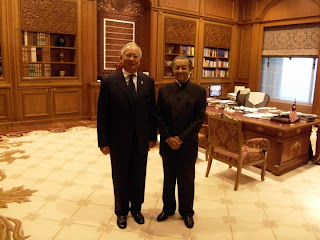 Despite of the opposition's constant attack on former Prime Minister, Tun Mahathir Mohamad (Tun M), they still cannot deny his strong 'aura' which haunts them.
Even though he is retired and only observes the nation's politics while providing his views, some sides somehow claimed that his opinions are orders.
Tun Mahathir is a very honest man and no one can deny that. When he felt that it was time for Tun Abdullah to retire, he stated the matter without covering anything.
Realizing that Tun M's aura could influence Malaysia's political arena, the opposition tries to change the 'aura' so that it would benefit them. That is why, as they criticize Tun M, they tried to describe that Tun M also agrees with them regarding the BN government's weaknesses and the Prime Minister himself. They are hoping that Tun M's aura will be able to influence Malaysians to also see the government's weaknesses.


So, that is how the fable saying that Tun M is working with Tan Sri Muhyiddin to bring down Dato’ Seri Najib happened, like what was published by Malaysia Chronicle.
And yesterday, another story rose saying that Tun M 'ordered' Dato’ Seri Najib to resign if BN fails to win big in the coming GE. Tun M's explanation on the matter where it is a regular tradition leaders would resign if they fail to achieve their target and that it has been going around since the era of Tunku Abdul Rahman where everything depends on what members want, was 'belittled' by the opposition's media. And in the same statement, Tun M did admit that Dato’ Seri Najib did took BN when the coalition was weak, but the opposition somehow tried to twist his statement by saying that Najib's government is weak.


The opposition's media, especially English language ones, kept on playing this kind of stories where their target readers are the ones who are much more rational. It seems that they are really working hard on it as GE draws closer.
What really happened was that Tun M is giving his full support towards the government led by Dato’ Seri Najib. he also stated that he would voluntarily help the government if there is any need for it.
And as we all know, if Tun M felt that Dato’ Seri Najib do not deserve the post, then he would not hesitate to give his opinion on it instead of covering anything because that is how he is, every rakyat knew that.


And this is what PR is really afraid of, the fact that Tun M is giving his full support towards Dato’ Seri Najib and BN. Dato’ Seri Najib's aura is enough to sink Anwar Ibrahim, Lim Kit Siang dan Hadi Awang. With the help of Tun M, how would the opposition fight against BN?
Despite of all the attempts to clash these two leaders, it seems like it is still going nowhere.
That is why, the opposition do not have to work hard just to raise support from rakyat through Tun M's aura. Seems too obvious that opposition leaders do not have great leadership to be loved by rakyat that they had to depend on their enemies.
Posted by tunku at 12:00:00 AM