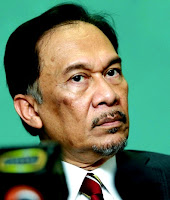 So it is confirmed that PAS former deputy president Nasharudin Mat Isa has been sacked as a member of the Syura Council, not as a member of PAS.
The manner the expulsion was made indicated PAS leadership is divided and uncertain whether the party should expel Nasharudin as member of the council and member of PAS.
Finally they decided to expel him as a member of the council, not from the party, which of course anger those aligned to PKR de facto chief Anwar Ibrahim who yearns to control the party from outside.
Anwar and his stooges in PAS would want to see Nasharudin sacked so that they can then gain control of the party without much obstacles especially now at a time when Anwar wants to field his men as PAS candidates in the coming general election.
Anwar knoiws PKR will not perform well and in fact, PKR may not even get the support of the Malays as expected by DAP, to complement the opposition pact’s position.
This means Anwar may lose many of the men who he is using or rightly abusing now and intending to use later, so if he can control PAS through his men in the party leadership line-up, he can rest assure that many of his men would be fielded.
Without such men, Anwar is nobody, because he is a man who just cannot stand alone. He needs soldiers, loyal soldiers who ask no question and ready to be sacrificed.
Anwar has sacrificed a lot of his loyal men before who now sit on the other side of the political divide, fighting tooth and nail against him, warning people of his ‘dirty character, morally and politically’.
So now Anwar’s plan in PAS is a ‘no-go’ so long as Nasharudin is still a member and Anwar will not sit still…he will continue influencing those who still believe in him like Nik Aziz NIk Mat, Husam Musa and of course his ‘slave’ Mohamad Sabu.
And PAS leadership, luckily controlled by Syural Council which is dominated by veteran fundamentalists, will not give up easily on Anwar’s intention as they know who that man really is.
Thus, their decision to just expel Nasharudin as member of the council and not from the party shows that they need Nasharudin in the party and they need the link to Umno, no matter what others, that is their partner PKR and DAP, say.
Say whatever one likes, only veteran fundamentalists like president Abdul Hadi Awang, NIk Aziz Nik Mat, Mustapa Ali and a few others detest Nasharudin’s action in being friendly with Umno, but the rest from top right down below still quietly want the link to Umno.
They know they are still Malays and Muslims despite the differences in political ideology.