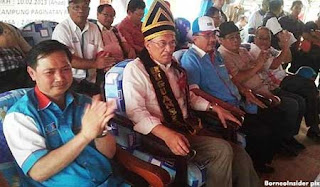 Understanding how Anwar really wants to become a Prime Minister, he kept on being honored by the people around him which might please him. Few of the titles he received include ‘Sivaji the Boss’ and 'Miracle From God'. Besides that, Anwar also like to describe himself as other great leaders such as Mandela, Ghandi, Suu Kyi etc. All so that he would be praised by his loyal fans.
Recenty, out of the sudden, PKR Ranau, Sabah decided to flatter him by awarding him the title of 'Malaysian Huguan Siou'. Huguan Siou is the highest title which can only be given to Kadazandusun ethnic.
The title was given to Tan Sri Joseph Pairin Kitingan. The title can only be given by Sabah Kadazandusun Cultural Association, a non political organization which has 40 ethnics in Sabah.
The title is a special award which is subjected under the jurisdiction of the Supreme Power of Koisaan where if there are any vacancy for the position, an Extraordinary Delegates Conference will be held to discuss upon the matter.
However, in a situation where no leaders deserve to be given such title, it will remain empty until the association finds anyone who deserves it.
That is how high Huguan Siou title is for Kadazandusun ethnic.
With that, it is weird, or even an insult, for Kadazandusun if anyone tries to 'create' the title 'Malaysian Huguan Siou'.
So it is not surprising when Anwar was criticized by Kadazandusun when the title was given to him by PKR Ranau.
As we all know, most Kadazandusun people are Catholic Christians, with a a few Protestants. Only a number of them are Muslims.
That is why, if it is true that the Malaysian Huguan Siou title was given to Anwar with blessings from Kadazandusun ethnic like what is stated by Anwar's side, then obviously it means more than just to show their support to PKR.
We are aware of Anwar's support when it comes to spreading Christianity belief, including apostating Muslims by Christian preachers. This is proven when Anwar supports the use of Kalimah Allah in Bibbles and he, through Khalid Ibrahim and Khalid Samad support the church which apostate Muslims.
Moreover, by cooperating with DAP which fights for the abolishment of 'Islam as official religion of Malaysia' clause, his stand on religion should no longer be questioned.
Thus, we are not shocked if it is true that the Kadazandusun themselves blessed the title Huguan Siou being given to Anwar. They should receive a lot of benefit from Anwar.
Not that we do not know that Malaysian Christians love to do the opposite from how Christians from overseas act. They include trickery and manipulation such as Malay-language Bibles and the use of kalimah Allah to replace the word of Christian God because this matter is opposed by Christians in other countries.
Besides that, Malaysian Christians also practice an open mind towards LGBT when Christians in other countries go against it. That is why some Christians refer themselves a Christians with Malaysian sect.
These Christians, especially DAP supporters, often put themselves above others.
That is why we feel that it is not impossible for these Christians to put culture, ethnic and Kadazandusun's belief lower than their 'Malaysian Christian' belief.
If this is true, then should Anwar's Muslim supporters celebrate the Huguan Siou title which he received?
Posted by tunku at 7:48:00 PM

Anwar; the shit n the beast