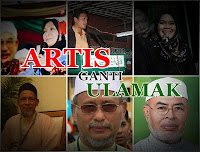 These days, UMNO has been working hard to approach Ulama group other than hosting religious programs involving international Ulama. This new approach proves how serious UMNO really is in defending Islam, and Malays as its ‘guards’ for Malays’ status as well as the Royal Institution.
Even then, UMNO never uses religion for any political motives. Instead, UMNO often welcome opinions from Ulama to find ways to strengthen UMNO’s ‘nature’. There is even rumor saying that UMNO will be listing a few Ulama as the party’s GE13 candidates.
Few of the names include a personality from Ulama Muda Umno (ILMU), Ustaz Fathul Bari Mat Jahaya.
ILMU features religious leaders which practices professional approach towards their ceramah, by using academic arguments and promotes unity to drive ummah towards the advanced culture in order to stay relevant today.
However, at the same time, we realize that such approach seems a but tough to gain any interest from most Muslims who love the light form of dakwah, opposing, being sarcastic, criticizing and insulting others, which does not promote unity at all, other than getting away from Islamic teaching which forbids us from taking over Allah’s role to sentence and judge others.
That is why, we hope that if any leaders in ILMU ever get into the political arena, this could change the ways Malaysian Muslims think.
Other than ILMU, there is another rumor saying that a few other names listed as part of UMNO’s political arena include Perlis Mufti, Dr Juanda Jaya and Ustazah Norbahiyah as well as a few others.
If the rumors are true, then these Ulama should realize that their role is not limited to religious issues only, they should also have the skills to administrate and understand the intricacies of the economy.
We do not want their constituencies to end up like Kelantan, a slow undeveloped state led by ‘Ulama’. We do not want anyone to make fun of the term ‘Ulama’ and ‘Islam’ just because these leaders are unable to perform their task well.
The interesting thing about UMNO’s commitment in improving the party by getting a lot closer to Islam would be their closest competition, PAS. PAS is somehow taking the opposite approach. Since they work alongside DAP and PKR, PAS has been working hard to show an open image, leaving their extreme image.
PAS is proud to get celebrities endorsing their party and at the same time, tries to portray that Ulama PAS are moderate people. PAS often promote problematic celebrities such as Bob Lokman, Abby Abadi or Aishah as ‘icons’, even more than their Ulama. These celebrities are dragged around the country to give ceramah on religion, something which they just recently found.
You can imagine how ridiculous their ceramah are, blaming others by saying that they are turning kafir, and how they became so ‘arrogant’ that they end up challenging to debate with Ulma, just because the Ulama do not support PAS.
PAS claimed that they managed to have these celebrities as the proof to the effectiveness of their tarbiyah. The fact is, this only show how uneducated the celebrities are.
Looking at how determined PAS is to prove that their party practices openness, it is not impossible that PAS would list these celebrities as their GE13 candidates.
If that is true, Malaysians can expect to watch one of the most lively election campaign in history as Ulama UMNO clashes with PAS celebrities.