Tian Chua's Drama Is Eating Himself 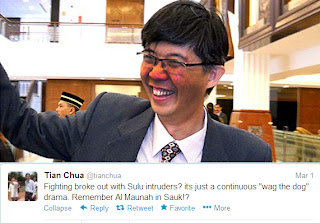 The opposition has to work hard to save Tian Chua while deflecting rakyat's perception that the opposition is not sensitive and unpatriotic.
No one knows why is it so hard for the opposition to admit that Tian Chua went overboard. It is a lot easier for them to slam Tian Chua and apologize to rakyat and the families of national heroes who died in the incident, on behalf of their party. Obviously by doing this, rakyat will respect them, making it hard for BN to find their weakness.
The opposition's actions in defending Tian Chua only proves that the party is not sensitive and unpatriotic. For them, the value of life means nothing and the country's sovereignty is just a small matter.
Thus, there is no use for them to point fingers as they themselves published Tian Chua's statement, through their official media, Keadilandlaily. If Tian Chua wishes to defend himself, he needs to charge the media that published the article on March 1, 2013 regarding his statement, and say that it is not true. It would be even better if he simply sue Keadilandaily.
However, Tian Chua refuse to do it, shows that he really defend his statement.
Few of the statements made by Tian Chua which led to the charge of insulting the security force include:
"The intrusion in Lahad Datu was only a drama of the government to intimidate the people to make it seem that Sabah is not peaceful." and
"There is a conspiracy by the UMNO government to divert the attention of the Sabah people, particularly from the issue of giving identity cards to foreigners." as well as
"The shooting in Lahad Datu is believed to be a planned conspiracy of the Umno government to divert attention and intimidate the people."
Instead, the opposition chooses to handle this issue by claiming that  the charge made against Tian Chua is part of UMNO's effort to divert the issue in Sabah. Fact is, Tian Chua himself did claim that UMNO is trying to cover things that are happening in Sabah.
For that, we feel that UMNO do not to defend itself in this matter, instead, let the opposition and Tian Chua run around trying to escape from this issue.
This is because, rakyat is well aware that government official media only focuses on things that are happening in Sabah. If the opposition's claim saying that the government is trying to divert the issue in Sabah, obviously we will never know the updates in Sabah from government media.
Rakyat are also aware that the opposition were really exited when they heard that Sabah was being intruded. Like cheerleaders, they push the government to kill those intruders while criticizing the government's diplomacy method which they deemed as slow.
However, when foreign media revealed opposition's involvement in the incident, their 'cheer' seemed to have toned down. When a few of our security forces were killed, the opposition accused the matter as if the government is making a drama in order to cover the identity card issue.
Clearly, only the ones who are blind could not see the opposition's mixed message.
Fact is, Lahad Datu intrusion has disturbed the government's focus to give the best service to rakyat, other than slowing down Barisan Nasional's early effort to prepare for the coming election.
In short, it does not provide any benefit to BN and that is why the opposition seem happy with the intrusion.
However, who would have thought that the opposition is getting hit by their own bullet. It even gets worse when Tian Chua reflect their ruthless character in open.
Actually, it is not that hard to look at the logic behind this. Think about it, which one is relevant between these two:
1. the ones in power, with strong support orders a bloody drama to be made just to open up space to be criticized, OR
2. those who really want to be in power, beginning to lose support, orders for bloody drama with hope to weaken the government or perhaps to bring down the government without having to go through election?
We also get to see how those who are crazy for power became insensitive and unpatriotic.
However, if this is not enough to show the opposition's involvement and Tian Chua's betrayal, the statement from Bar Council, one of opposition's covers, wanting to defend Sulu terrorists, should be the end towards all support for the opposition.
Posted by tunku at 9:00:00 PM