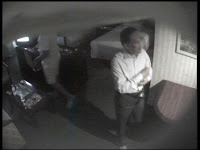 PETALING JAYA: Opposition Leader Datuk Seri Anwar Ibrahim (pic) has threatened blogger “Papa Gomo” with an RM100mil suit if the blogger does not withdraw a post on his website which links Anwar to another sex scandal.
In Anwar's letter of demand, he claims that the blogger had maliciously intended to damage his reputation by posting a compromising photo which the blog alleges was of Anwar.
The March 16 posting on www.papagomo.com, featured a single black-and-white photograph showing the naked back of a man in a room.
The post also provided a link to another blog page called “Aksi si Raja Goyang”, which published 13 photographs showing two men groping and kissing each other, purportedly screen grabs of the same video.
Anwar has since denied he was the man in the video.
The letter issued to Wan Muhammad Azri Wan Deris, demands the blog to publish a full withdrawal and apology, and to refrain from further publishing articles of a similar nature.
The letter, filed through Anwar's lawyer N. Surendran, gave Papa Gomo two days from Tuesday to reply, after which they would begin legal proceedings.
“These allegations, and the article taken as a whole, are completely false, malicious and defamatory of our client.
Further, these allegations are calculated to injure our client's credit and reputation as a public figure,” said Surendren in the letter.
Surendran said his client would sue for RM100mil if the blogger did not comply.
When contacted, Wan Muhammad Azri said he had not received the letter of demand in person.
However, in a post on Tuesday, Papa Gomo acknowledged the letter of demand and warned Anwar that he would release more photos if the letter was not withdrawn.