The cronies behind the scenes who benefited from Lim Guan Eng’s Mega folly of a Mega Project which costs over RM6.3 billion.
The projects involve:
In order to know the real story behind this mega corruption and abuse in Penang, we need to go back to the night of December 17, 2013 – just a day after the DAP National Congress held in Penang where the DAP CEC Members were elected.
No need to talk about the DAP CEC Election fiasco and their inability to use EXCEL to do proper calculations. The elections went well and the results were largely within the leaders’ expectations and so there was an obvious cause for celebration.
But in Guan Eng’s mind, there was an even bigger reason to celebrate – because he has finally completed all the discussions on the allocation of spoils for Penang’s largest infrastructure project. The discussion was held a day earlier on December 16 – a day immediately after the CEC Elections held on December 15, 2012.
The discussions with the partners were intense and filled Guan Eng with adrenalin – pumping with excitement to see such huge numbers that his small 8-digit pocket calculator could not even accommodate the massive calculations which easily stretched into 10 digits. Guan Eng mumbled a note to self: “remember to ask secretary for a new 12-digit calculator”.

There is an indescribable joy when one punches the forbidden numbers into the calculator and viola, one sees the apportioned amounts and siphoned profits camouflaged as blatant overcharging. Guan Eng was thrilled to bits – for the first time, he is really gonna be a billionaire…a dream come true for a failed accountant…but a successful Chief Minister and politician.
The final allocation in terms of kickbacks and gifts expressed in percentages were nailed down reflected in a single Powerpoint slide. The thought of it pleased Guan Eng so much that he could not resist firing up his notebook computer to take a look on the Powerpoint slide again.
“This is the time for harvest…” as Guan Eng’s thoughts lingered away…see what power can do – and this is Real Power.
“I’m not going to be a CM without power like that bo-hoot (no balls – seedless) durian Koh Tsu Koon. Me will be a CM with Real Power…”
The screen on the notebook computer showed this PowerPoint slide: 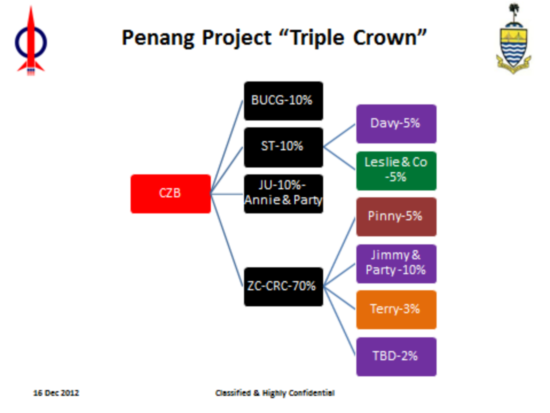 We already know from media reports the following:
But we don’t know who the following people or entities are:
These names are likely to be code-names representing certain personalities…who are these people…Read the DAP Insider for the next article as we break the puzzle and reveal the identities of each of these code-names…