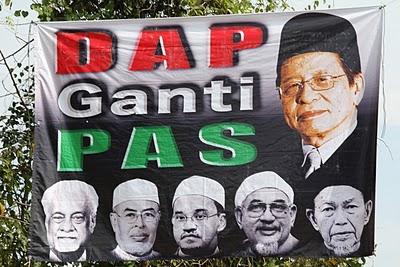 Newspaper Sinchew Daily dated August 28, 2012 in the opinion column showed an article written by the newspaper's Deputy Editor, Tay Ting Hien regarding the scenario where PAS overpowers the parliament and introduced Islamic Criminal Law.
"In one fine day on September 2014, Datuk Seri Abdul Hadi Awang will propose the Islamic Criminal Law in Parliamant. The opposition coalition will begin to break, PAS's MPs will all support the motion while the rest of DAP members will reject it. Both Muslims and Non-Muslim PKR MPs will fight against one another...
"Barisan Nasional (BN) as the opposition then will would go left-wing, UMNO's disciplinary board will say, as UMNO Muslim, we definately support the Islamic Criminal Law. Objections made by MCA, Gerakan and MIC will not bring any effect which led them going out of BN...
"During the vote in Dewan Rakyat, PAS and UMNO would gain both two thirds of majority and it would then be implemented. At that time, Abdul Hadi would thank all MPs who supported his proposal and he would say the decision came through democracy.
"Malaysia has managed to fulfil its objective to become an Islamic nation, the next step would be UMNO and PAS announcing that they will form a coalition government..."
I am not a fortune teller for the 2014 politics but the scenario above is not something that is simply made up from hearing rumors. From the knowledge of political science and management science, there is this term known as 'Political Scenario'.
Collect all of the current scenarios, put them all together and see the probable target. List down the positive and negative then compare the differences.
Scenarios such as the ones above are probable simulations that might happen.
As for the political scenario for Abdul Hadi, he had explained it clearly that if PR becomes the government, PAS through democracy would implement Islamic Criminal Law.
Even PAS's stand is very clear upon this goal, the fact that they would get to it legally. Moreoverm PAS did get to clear the motion on Islamic Criminal Law in Kelantan's Dewan Undangan Negeri in 1993 with UMNO members supporting them.
Under the trust and responsibility for religion, the gap of understanding between both parties were only separated by a thin line.
At the time, the law clashed with the Federal Law and that was why it cannot be passed.
If it is changed to a different situation, if they are to be the central government and proposed the same motion again, and backed by UMNO, defense of the federal Constitution might be able to be broken.
For this country, Islamic Criminal Law does not involve the legal and judiciary system, this could also change the formation of Malaysia and it could lead to a change on our nation's policy and belief.
When the law is passed, this means Malaysia would be separated from the outside world and its legal system, hence forming a pure Islamic nation.
Chinese society can no longer act as if they do not know anything and they cannot afford to think that everything would get better.
As for the structure in the opposition coalition, their goal would definitely to become the government but when they do manage to get what they want, they might still unable to see eye to eye when it comes to separation of powers.
Would coalition members be able to block PAS's fight? Everyone would have to pray that the coalition would be a strong pact.