Hell For PAS Members If Hudud Is Not Implemented 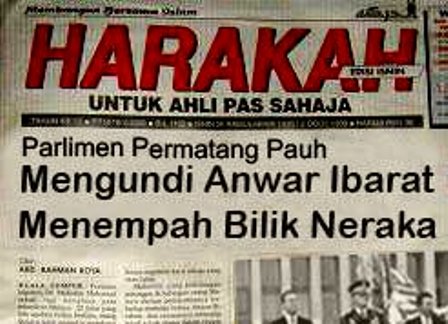 If Pakatan Rakyat had begun arguing about the administration pattern even prior to the coming GE, how would it be for Malaysia if they manage to win it?
As for their arguments, it is not about any new issues which were recently raised, but it is about old issue, hudud, which keeps on going on a loop where it would often be repeated each time election comes. Hudud, which is only 0.0001% part of Islam, but turned into a huge thing by PAS because they are out of issues to prove that they are much more Islamic than UMNO.
And hudud has been the main rejection for DAP who do want to have any part with Malays, including Islam, Royals etc.
Now, their scholars had came out with a fatwa saying that supporting DAP is haram because they are non-Muslim, Islam is their enemy. So, this fatwa is also supported by Kelantan PAS's Islamic Scholar Council Chief and he gave the excuse that the current relationship between PAS and DAP is okay because both the parties are going against UMNO/BN who do not accept hudud.
In other words, according to PAS's law, they can work alongside non-Muslim who clearly rejects hudud just so that they could bring down parties who also reject hudud. And if PR wins the next GE, so it is not wrong for PAS to share power with those who reject hudud.
What kind of law is this? Or what kind of religion is this?
Only because 'not implementing hudud' is a huge sin that UMNO/BN had to be objected, logically, DAP should be rejected as well and that they would het the huge sin as well.
Thus, as long as PAS is still with DAP, all of its leaders and members all bear the huge sin.
What is worse is that if Pakatan Rakyat finally gets to rule and PAS still do not implement hudud just to cater to their relationship with DAP, obviously their sin would be a lot bigger than how big it is right now.
We are convinced that if PAS really manages to be in power, PAS would give the excuse that hudud cannot be implemented simply because of the consideration on the reality of Malaysia where it is a country with multiracial community.
But rakyat would definitely reject such excuse because UMNO has been explaining the same thing for years, which is ignored by PAS.
That is why, if UMNO is accused by PAS as a party which had gone kafir or filled with sin for thinking that hudud is suitable to be implemented because of out time, situation and place, so PAS should get the same thing too.
PAS would be even worse because they have been working alongside DAP who do not just reject hudud, but they reject everything that has to do with Islam.
We feel sad to see things that PAS has to go through just for power. As DAP kept on threatening that they would rather die and be out of the party to fight against the establishment of an Islamic nation, PAS do not dare to do anything, they do not even want to be out of Pakatan Rakyat, let alone die to fight against DAP.
Is this how a party which is said that it could bring Muslims to heaven should be like?
Posted by tunku at 4:36:00 PM