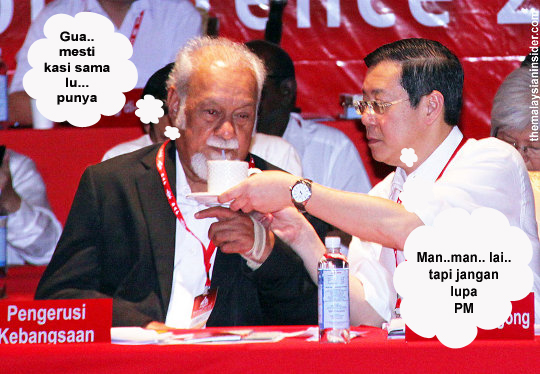 Based on a report, it showed that PKR would compete for 66 seats for the coming GE13.
The decrease is up to 31 seats to be compared to 97 seats which PKR took back in 2008 GE.
The decrease can be related with the pressure made by DAP who sees potential in providing tight competition with BN.
With the same amount of seat for PAS, 76 seats, this means that the other 89 seats would show DAP candidates competing with BN.
Almost all of the Chinese majority and a few Parliamentary areas which were provided for PKR would now be competed with DAP candidates.
The same report also mentioned that PKR would also have troubles in finding suitable candidates to face the coming GE.
This means that Anwar Ibrahim's propaganda to take over Putrajaya all these while is worth nothing.
For the record, on 2008 GE, from 47 seats which are competed by DAP, they won 28 of the seats with majority vote.
PKR in the other hand only won 31 seats even though they competed at 97 areas, While PAS only won 22 seats from 66 seats.
Within less than two years, PKR lost 5 seats when its representatives jumped out from the party to become INDEPENDENT members including a seat which was won by BN from small election.
Looking at the record and performance of DAP, it seems logic that DAP would be in power when it comes to seat distribution and to be in power of the opposition's policy.
And if the candidates are confirmed, the rumors where they want to appoint Lim Guan Eng to be the next PM might be true if they win the GE.
Do the Muslim Malays in PKR and PAS want this to happen?
tunku : if pakatan are to win the next GE, how can anwar be the pm when his party only contest 66 seats out of 212? how can a pm from pas when it is reported that dap will contest about 89 seats? this means left 57 seats for pas to contest.who will be the dominant party in pakatan, obviously it's dap. so do we have first chinese pm for malaysia then ? even if they put a malay as a pm,he will be just a puppet to dap like what we have seen in perak before when nizar from pas became the mb and he was merely a puppet of dap.
Posted by tunku at 12:37:00 AM