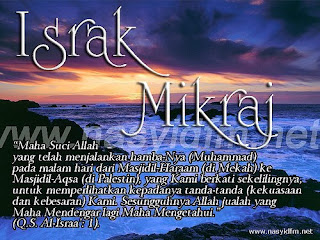 KUALA LUMPUR, June 29 (Bernama) - Prime Minister Datuk Seri Najib Tun Razak has urged Muslims to use Israk Mikraj in shaping excellent Muslim character and a pillar of strength to Muslims.
"May Muslims fully appreciate the event to make us the best in pioneering unity through racial and religious diversity. Excellent Muslim character will create the unity spirit and bring peace to the nation.
"Without it, Muslims become weak, like division, not concerned with harmony, and even hate peace," he said in his Israk Mikraj greetings to Muslims in his blog www.1malaysia.com.my
He asked Muslims to take lessons from Prophet Muhammad's Israk Mikraj journey to guide the nation towards achieving Vision 2020.
"We are implementing the Government Transformation Programme and Economic Transformation Programme in various fields.
"This is proof of progress and the government commitment to develop the nation. Transformation requires courage and change in mindset and extraordinary achievement."
Israk Mikraj was a gift to Prophet Muhammad's glory and the miracle is proof of Allah's power.
Israk was the prophet's journey from Grand Mosque in Mecca to Al-Aqsa Mosque in Palestine accompanied by angels Jibrail and Israfil.
Mikraj was the prophets's ascension to the sky accompanied by Jibrail to meet Allah.
Najib said at Al-Aqsa Mosque, Allah showed the leadership qualities of the prophet in strengtening the faith among other prophets.
"He became the imam in prayers not just for certain races or nations, but to the whole of mankind from different ethnics and tribes.
The two mosques are close to the heart of Muslims as Al-Aqsa Mosque was the first qiblah ( direction) in prayers before it was changed to the Grand Mosque. "Muslims must fight for the Palestinian cause to free them from the cruel Israeli regime."
The second most important lesson form Israk Mikraj was Allah's command of five prayers daily for Muslims.
Posted by tunku at 1:06:00 PM