Lim Kit Siang confidence of pakatan winning the next GE. 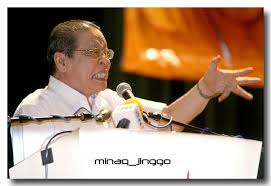 PETALING JAYA: Pakatan Rakyat has set its sights on controlling 11 states in the next general election, said DAP adviser Lim Kit Siang.
He said Pakatan had decided on three targets to retain Penang, Kedah, Kelantan and Selangor; win back Perak; and form governments in Johor, Negri Sembilan, Malacca, Pahang, Terengganu and Perlis.
Dubbing the upcoming election as the “battle of the century”, Lim said it was not just state governments but federal power that would be at stake.
He said Prime Minister Datuk Seri Najib Tun Razak was fully aware of the stakes involved and that a “5% swing in votes” would see Pakatan taking over Putrajaya.
“This is why Najib reminded the Selayang Umno division today (Saturday) that in a general election there is no such thing as a runner-up,” he said in his speech during a dinner in Teluk Intan on Saturday night. The speech was posted on his blog and copies sent to the media.
Lim claimed this was why Umno and Barisan leaders were “so panicky” about the Bersih 2.0 rally, fearing it might be more successful than the first.

tunku : it is very simple, if lim kit siang is confidence that they can take over Putrajaya why want to have the illegal "bersih" rally then? who is acting panic here, the BN or the pakatan? i am sure pakatan will get more support if they do not stage this stupid illegal rally. this rally is just to create tense so that government will have to divert their attention to this rally than developing and administrating the country well and at the same time hoping it will turn another egypt.WAKE UP PEOPLE, we are not like egypt and we are doing well now. do not put this country in the dogs(pakatan) hand.we will be in chaos.for lim kit siang info, this time there are more anti "bersih" rally voices than the previous one. dap is hoping this rally to turn out as a battle ground.at the end it is the Malay lost.think about it.this is dap's dirty agenda.
Posted by tunku at 11:47:00 AM

high time for the govt. to take stern actin against these culprit without any sympathy. We malays are getting tired of all this and we must stop all this at all cost. Malaysia is our country but those bustard can fly off at anytime if chaos were to happen. Get loss you DAP

Unfortunately, we know that there will be hooligans who wills start chaos and cause trouble. We can only hope that no one gets harm in anyway. However, it is a critical time for the government right now. How the government deals with the riot is really important. I think a lot of people do not like the Bersih 2.0 rally, as they didn't like the Bersih 1.0. But how the government deals with it is important towards gaining confidence of the people if this is the right government to lead Malaysia into the future. The people wants protection, but hate it when military action is taken against civilians. That's what the opposition really wants, is to show that the current government is not fit to lead by showing that the government cannot provide peaceful protection to the people. How not to look bad is the question, and the answer is not so simple. No matter what the government does, it may look bad. The best way is to ignore this minority of peace hating group and hope they calm down. If they don't, the government should come in, as a rescue party....not as a military.

....indirectly what he is saying is that " the Malays are fighting among themselves, this is our chance ".....