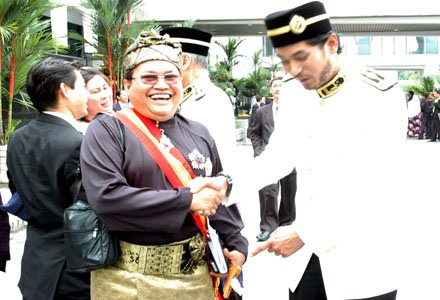 Bersih Rally: Umno Youth Will Have To Face Consequences - Hishammuddin

PUTRAJAYA, June 17 (Bernama) -- Home Minister Datuk Seri Hishammuddin Tun Hussein said today Umno Youth will have to face the consequences of their action if they proceed with their intention to hold an illegal rally on July 9.
Hishammuddin, who is also former Umno Youth chief, said nobody was above the law and that they (Umno Youth) would have to deal with the police just like others.
"My advice is the same to everybody and as I mentioned in Parliament, the police are looking at this as a security issue.
"I think when it comes to this, it doesn't matter if I am a former Umno Youth chief. Umno Youth will have to face whatever consequences of their action, as I had to when I was Umno Youth chief in my time," he told reporters after a meeting with an Australian delegation and representatives from United Nations High Commissioner for Refugees (UNHCR) and International Organisation for Migration (IOM) here.
Hishammuddin was asked to comment on Umno Youth chief Khairy Jamaluddin's announcement that they will be also be organising a rally this July 9 to hand in a memorandum to the Yang di-Pertuan Agong in supporting democracy and the role and reformation carried out by Election Commission (EC).
The Coalition for Clean and Fair Elections (Bersih) is also organising a rally on that day.
Asked whether the stand taken by the Youth was Umno's stand, Hishammuddin said the decision to organise the rally was an executive committee decision.
Therefore, he said, it was purely the Youth's stand, not Umno's as a whole.
On a claim by two Singaporean women that they were ordered to strip naked while detained by a Johor Immigration officer earlier this week, Hishammuddin confirmed that two officers from the detention centre had been suspended.
He, however, said he had yet to receive the full report on the incident.

tunku : my suggestion to the police is to arrest all the leaders involved in the 9th july illegal rally. they can be from the opposition leaders or from the pro government leaders. first arrest kj and ibrahim ali, then go all out to arrest all the opposition leaders involved.they won't have the chance to complaint as the police took action against umno youth and perkasa first.don't spare anyone.we need to keep peace in our country and stop all these illegal rallies.
Posted by tunku at 12:00:00 AM

I don't believe a word that 'pondan' said.

dear home minister dont litsen to anom 12.50 am, the advise is an old trick, the raayat is quite different now, that action can backfire, think of a new ideas, like in the uk, they allow the demo/procession but escorted by police and have strict route to follow and time to demo....so here govt win and the demo sponsor also win...thank you.

stupid and idiot people like to compare uk or usa with malaysia. why never compare china with malaysia? any demo there, any election there?

Nobody is above the law of this country. So please take action on anyone who wants to create trouble irespective whether they are pro-govt or the opposition.

Peace and stability of the country comes first.

You face the consequences if you go against the law.

Everyone knows the motives behind this BERSIH demonstration. Its all about Anwar. He knows pretty well that the odd is against him in his sodomy case. His only hope is to produce alibi which he cannot do.

So the only way is to create disturbances in the country before his trial on the 16th July 2011.

Don't assume the rakyat is stupid. We know.