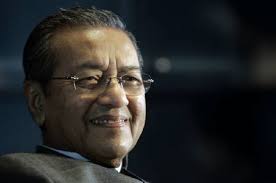 Disagreeing with US President Barack Obama, Dr Mahathir Mohamad said the Chinese and Indians are wealthy and successful in Malaysia.

“In Malaysia, despite our policies, Do you see the Chinese poor? The Indians are professionals, they are lawyers and doctors,” he told reporters.

“Those who didn’t come to Malaysia are not so fortunate,” Mahathir added.

The former prime minister also said that he agreed with American economist Joseph Stiglitz that there is huge inequality in the US.

Obama had ruffled the feathers of certain quarters, when he said that Malaysia would not succeed if non-Muslims are not given equal opportunities.

“I would like you to read Joseph Stiglitz’s book (‘The Price to Pay for Inequality’).
“He points out that there is no equality in the US at all. One percent owns all the wealth and the rest are poor. That is why there is a group calling themselves the ’99′ who wants to occupy Wall Street,” Mahathir said.

He reiterated that Stiglitz spoke more truth than Obama, who was the first American president to visit Malaysia in nearly 50 years.

Obama was welcomed with much fanfare when he came to Malaysia last weekend and met the Yang di-Pertuan Agong, the prime minister and cabinet ministers.

He also had a town hall dialogue to rally Southeast Asian youth leaders and the civil society movement.

Despite rebuking Obama’s recommendations on how to treat minorities, Mahathir did say it was good that a US president had, at least, touched down in Malaysia.

“Obama’s visit can only help expose him to Malaysia. I am confident that he has heard much before this but had no clue about what Malaysia is,” he said.

To a question on Obama’s visit to the National Mosque and royal tombs, he said that he applauded the “very diplomatic” move.

“He’s good at winning hearts, that’s why he won (the US elections),” Mahathir said.