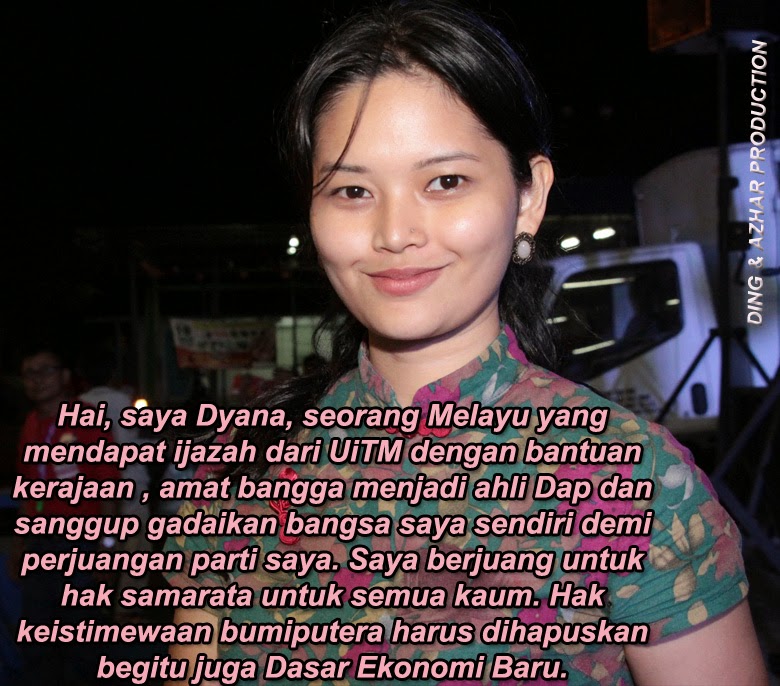 Dyana Sofia, a DAP candidate in Teluk Intan by-election could have gained a little more respect if she used a different approach in her campaign. Dyana could have shown some credibility and sensibility by tackling real issues regarding the locals but in fact, she chose to utilize all her energy to prove her anti-Malay-nationalism stance.

Teluk Intan has become a battleground between Dyana and her own roots.

Instead of fighting for all races, Dyana choose to not fight for the Malays and Bumiputeras and condemn all those who do.

Dyana asked, ‘when did joining UiTM makes one an UMNO member?’ Well, it doesn’t. It only makes you a lucky enough bumiputera to have the opportunity for higher education in a country where the minorities have the most economic advantage.

In her defense, Dyana claimed that she had proposed a similar institution like UiTM which provides affordable, quality education for all races, thus, equal opportunity and total equality.

Dyana is obviously being idealistic and failed to see that total equality doesn’t lead to justice and fairness to everybody. Not, when we see job ads that say ‘Mandarin is an advantage’ and not when the private sectors’ top managements are being conquered by one race – the Chinese.

Talking about equal opportunity, Dyana should know better that hardworking, qualified, brilliant person may not always get the opportunity they deserved, or else, why would a young, in-experienced girl who obtained her education through ‘bumi special privilege’ be given the opportunity to contest in a by-election?

In fact, how did she become a political secretary to the ‘emperor’ of DAP? There are many others who have served DAP longer and who have proven records in politics. So, why Dyana? Certainly, she did not get there by merit or hardwork.

Dyana used her privilege as a Malay to get into UiTM and then used the same privilege to bypass all deserving personalities in DAP to become the political secretary to Kit Siang and eventually, a candidate in a by-election.

So, what rights does this Dyana have to talk about merit or equal opportunities or total equality?

Very well said, Tunku...after reaping all the benefits of being a malay, she's now questioning it for other malays....to be fair and to prove her stance, she should translate all those benefits she had enjoyed into monetary value and make an effort to pay it back...