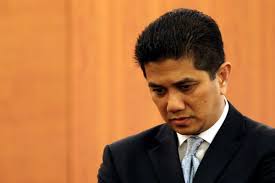 PKR deputy president Azmin Ali declined to comment on allegations of his involvement in manipulating votes in the ongoing party elections.

The Gombak MP said he has left it to the party's central elections committee (CEC) to investigate the claims and hoped stern action would be taken against the individual involved.

"I don't want to speculate on the allegations, let the CEC investigate the matter," he told a press conference after a meeting with Penang party members here.

It was reported that PKR leader, Badrul Hisham Shahrin, had claimed that a group of Azmin's supporters were involved in vote manipulation.

Azmin is currently leading with 5,111 votes ahead of his opponents, Tan Sri Abdul Khalid Ibrahim (2,288) and Datuk Saifuddin Nasution (2,322).

Azmin also denied that PKR was nominating their candidate for the Bukit Gelugor parliamentary seat by-election on May 25.