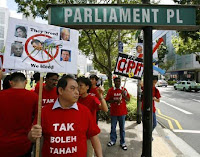 PR seem proud as they talk about 'Chinese tsunami' which occurred during GE13. With analysis showing 97% Chinese rejected BN, their claim is logical. BN also accepted the rejection among Chinese and did not claim that it is a lie.
What is happening here only strengthen the position of Malays in the country's politics. This result also showed everyone how racist Chinese newspapers have been all these while.
Today, the Chinese do not have any rights to accuse the government of being corrupt and not transparent anymore because they clearly accepted DAP, a party which has been proven to be corrupt, even at the highest level when we saw how they cheated their own members during CEC election.
However, that is the fact, Chinese are hypocrite.
Based on GE13 result, the gap between Chinese and Malays in this country is getting wider and wider. However, that is what the Chinese have been wanting all these while.
That is why, this increases prejudice between races and it causes intense and awkward tension for both of these races.
Prior to this, each time pushed by Chinese newspapers, Malays would act maturely and gave the win to them to avoid any tension. It came to a level where even when Namewee decided to be rude to the government, was also forgiven by the government.
However, those are history, when we still hope that Chinese still love this country and support the spirit of unity just like other rakyat.
But, thanks to GE13, their real colors come out. This is an eye opener for Malays who refuse to admit that fact, just because they have a lot of 'nice' Chinese friends.
No one understand better the oppression done by the Chinese other than those who lived during communist era as well as Singaporean Malays. Even then, only those who are smart understand the matter. The others are still in denial as they choose to believe that they are not oppressed and that they are given equal rights as the Chinese in the country.
Fact is, Singapore's PAP party has never cared or listened to Malays. There is almost zero Malay Singaporeans with high posts. Even some of the low but important posts are not given to Malays.
The methods of how PAP ignored Malays are not as different as DAP in Penang. They applied economic pressure against Malays who are left behind.
Indirectly, the rise of Malays in Malaysia due to 'Chinese tsunami' which happened in GE13 somehow inspired Singaporean Malays. They seem to be taking this chance to open the eyes of their friends who still fail to see the real PAP.
Everyone is aware that PAP and DAP are related and that PAP offered a lot of help to DAP during this GE, an intervention that was not supposed to happen. Clearly, it seem like there is a pact between the Chinese in these two countries to control all. In other words, their loyalty remain to their race, not to the country.
This gave an idea to Singapore Malays, they should take the same approach. If race is far more important, then they should together hold onto Malay spirit, the same spirit championed by UMNO.
Malay spirit in Singapore is not growing stronger and there is no doubt that it is possible for them to cause Malay tsunami in the country soon. If this happens, do not blame Malay or Malaysia, blame DAP and PAP as they chose to be in power for the sake of Chinese.
Posted by tunku at 10:30:00 PM