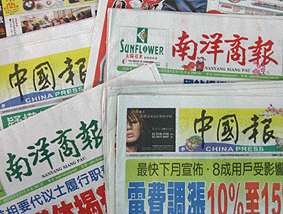 This is the difference between nationalist and assabiah where they would admit mistakes done by its side.
Nationalists would defend their race but still act fair instead of oppressing and hating other races. However, someone who has assobiah or racism in them would cover the mistakes done by their friends and they would hate everyone who are not among them.
In a way, no one can deny that the Chinese are the most successful race in Malaysia. That is why, protests saying that they are being oppressed by racist Malay government, is illogical. How can they claim that they are oppressed and at the same time stand proud over the fact that they are the richest race? How can the rich be labeled as the ones who are oppressed?
Thus, Chinese' fight to 'struggle out of oppression' through PR is a huge lie against all, including themselves.
The 'idea' that they are being oppressed were triggered by Chinese extremists such as Dong Zong and DAP. Both these parties cannot deny this matter because it is clear that from their ceramah and statements everywhere, where they often claim that 'the Chinese are being ignored' by the government.
This idea was then spread out through Chinese newspapers. Through vernacular schools, this race now managed to form a generation which strongly believe in this 'idea'. That is why we see this generation holding on to the upside down Malaysian flag and rallied in Kelana Jaya Stadium two nights ago.
It seems like what the Chinese have always wanted, to show their power and to pressure the government through GE13 has reached its objective. They hope that it could scare the government and Malays, and that people will begin to respect them. They also hope that the government will bow down upon them.
However, just like how Kit Siang made the wrong judgement on Malays' response during May 13th tragedy, the same thing goes to this GE13. Malays did not surrender, instead, the race rise up and challenged the Chinese. Kit Siang failed to remind his race that Malays' patience has its limits, Malay manners has its limits, even though it might seem like it is unlimited.
Chinese is the minority, that is a fact which they cannot deny.
As a democratic country, the Chinese should accept the fact that majority's voice is far important than their voice. That is why, they should be grateful because despite of being the minority, the voice of their race is still big, too big that it is beyond control.
However, with the 'united' rejection from their race in this GE, up to 97%, this only weaken the Chinese, instead of making their voice stronger.
However, they are lucky because the Malays are not as cruel and stupid as they are. Denying the voice of Chinese in total would only lead to disaster, but at the same time, we cannot deny that their voice are only left with the 3%.
The government is disappointed over GE13's result due to the fact that the Chinese are never loyal to this country. They don't show sincerity towards Barisan Nasional. All they do, the good deeds they performed, are only for the benefit of their own. They never share the spirit of goodwill, 1Malaysia, instead, they order other people to do so.
Sadly, up until today, the Chinese still do not see this as an issue. That is why, there are still Chinese voices demanding the government to keep on surrender and listen to them, in order to gain their support.
Problem is, they have received more than what minorities in other countries should have gotten. And the government cannot keep on listening to them just to care for their sensitivities. All these while, Utusan Melayu has always been deemed as racist. UMNO claimed as racist. All because these entities reminded them how the Chinese already have everything.
The ones who are racist are those who want to widen racial gap through vernacular schools, UEC etc. And they are no other than Chinese newspapers, Dong Zong and DAP.
Now, after realizing that their GE13 'tsunami' could not bring down Malay government, and that it weakens the Chinese, they cannot help but to ponder, 'what's next?'
So, yesterday, Chinese newspapers blamed DAP over all the things which had happened. They made a sarcastic statement saying that rocket has now crashed because DAP played around emotions too much. Chinese newspapers seem to wish that they could put aside the rage of Dato’ Seri Najib over their actions which incited racism but at the same time blame Utusan.
Our message, Chinese newspapers do not have to blame DAP or anyone because we are aware that Chinese newspapers, DAP or even Dong Zong and a small part of MCA and Gerakan operates as a single entity, 'Chinese'.
This race will never be nationalists and they can never change their mindset as long as they are taught to be racist from home, vernacular schools as well their media. Thus, all they do is based on their racial interest alone, not the country, and definitely not for rakyat nor other races.
And this is the fact which the government need to hold onto in setting the path of leadership for this country after GE13.
GE13 showed how the Chinese never forget how they hate Malay Government. Clearly, they are not here because they want to, instead, they 'had' to be here because their ancestors chose to stay in this harmonious country. Everyone is well aware that the Chinese are very racist, other than kiasu as well as chauvinist, where they would never admit their mistakes, nor admit their defeat.
Posted by tunku at 12:00:00 AM

Gelang Patah is the icon of the chinese tsunami.

Ghani as MB has helped chinese business for 18 years and yet these racist chinese voted for parachuted kit siang who has done nothing for them.