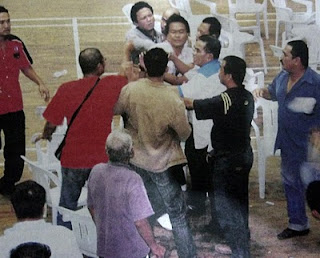 KUALA SELANGOR, Oct 9 (Bernama) -- The Kuala Selangor PKR branch annual general meeting (AGM) held at the Bestari Jaya community hall today turned chaotic after several members questioned the signatures on the branch's statement of accounts.
The commotion happened as soon as branch chief Tan Sri Abdul Khalid Ibrahim, who is Selangor Menteri Besar, finished delivering his speech.
The branch's internal auditor Norazhar Jamil claimed that the accounts were audited by individuals who were not appointed as members at the last AGM.
Speaking to reporters here, he said his name and that of another appointed member, Mohd Sharif Ismail, should have appeared as internal auditors in the minutes of the last AGM and not the two individuals.
Norazhar said previously he had been approached by someone who wanted him to sign the statement of accounts, but he refused because it was not issued with proof.
He said he also found that the individuals who signed the statement held positions in the party but according to the party's constitution, the internal auditors cannot hold any position.
Meanwhile, Abdul Khalid said the statement of accounts would be audited before being presented again at the next meeting.

tunku : looks like commotion at pkr branch AGM is a annual affair. the best part it is the branch of khalid ibrahim.khalid ibrahim can't even handle his branch, what how can he handle the state's affair.
Posted by tunku at 12:01:00 AM