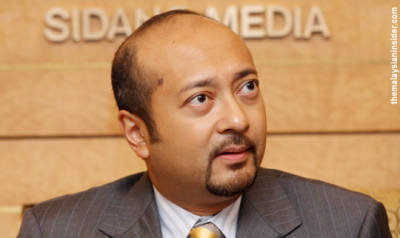 PAPAR, May 1 (Bernama) -- International Trade and Industry Deputy Minister Datuk Mukhriz Tun Dr Mahathir has suggested initiating an 'Umno scholarship' and establishing an 'Umno College' to project the role of the party in youth development.
He accentuated 'Umno' in both proposed endeavours in order that Bumiputras, in particular, could see and appreciate the party's contributions.
He stressed that both institutions must benefit not just children of Umno members, but of every community "whom we also serve".
Mukhriz said this at a press conference after opening the division's 20th Sabah Umno Youth Movement delegates' meeting here Sunday.
The meeting was attended by representatives from 94 branches.
Mukhriz, who is also Kedah Umno liaison deputy chairman, noted that there had been bumiputra students with excellent academic results but did not have the opportunity to pursue further studies.
He said the scholarship offered accessibility to easy loan to enable such students to reach the highest level.
He acknowledged that the idea was not new as some Umno grassroots were already providing similar scholarship.
On the proposed Umno College, he said it would be an avenue for bumiputra students who failed to get into institutions of higher learning to acquire skills.
"It is in line with our New Economic Model to increase income," he said, citing the service sector as a focus.
He said the endeavour might entail taking over an existing college or collaborating with other training institutions.
Meanwhile, Mukhriz encouraged the delegates to be vocal "but not to the extreme" in expressing the needs of the communities.
"Don't let the opposition instead, be the ones to voice out for the people," he said, adding that they could not be complacent and take the prevailing unity for granted.
"Be united, whether in Umno or BN. Petty squabbles among us can stealthily destroy what we have now," he cautioned.
Among those present were divisional chief Datuk Rahim Ismail, his deputy, Datuk Gulamhaidar Khan Bahadar and divisional youth movement chief Armizan Mohd Ali.
On another note, Mukhriz believed the national Umno Youth leadership's decision to remove Azman Roslan as Sabah Umno Youth chief recently, was carried out after proper deliberation.
"I cannot comment further as I do not know the reasons for the decision," he said when responding to the press after launching the division's youth wing's 20th delegates meeting here.

tunku : mukhriz suggestion on initiating the umno scholarship and college is very good and its time for umno to have it's own foundation to help it's members not only in education or building college but also in starting a business.may be they should set up BN Foundation to help all the bn members who needs help both in education and career.
Posted by tunku at 12:00:00 AM

anon 7.44am,
u r the biggest MF in malaysia.i believe u r more stupid and moron than others.

I agree. But make sure that Federal Funds are not used. Then it will be in our total control.

Scholarship ... YES.
College ... No so that it could be opened to all to learned how our leaders had united to make Malaysia a better nation. Also the vision of the current leaders as compared to oposition viewpoints.