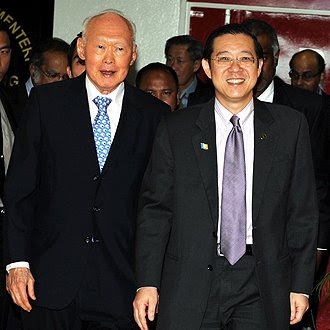 Penang wants freedom of information law, but blacks out details of RM300 million Relau convention centre expansion project, says Gerakan.
The BN today stopped short of labelling the state government a 'hypocrite' for initiating a Freedom of Information Act - but failing to disclose details of a RM300 million project of the Penang Municipal Council (MPPP).
State Gerakan local government bureau vice-chief Teh Leong Meng said the MPPP held a closed-door meeting with individuals and organisations in February to gather feedback for a project dubbed the 'Subterranean Penang International Convention and Exhibition Centre (sPICE)'.
But Chief Minister Lim Guan Eng, who chaired the meeting, barred the press from attending
"To date, the state government has not disclosed any detail on the project to the public... there is a blackout on it," Teh (left) told a press conference at the Penang legislative assembly today.
Lim announced the plan for the project in January and gave members of the public two weeks to provide feedback to the state.
sPICE is to be constructed in front of the existing, poorly maintained Penang International Convention Centre (PICC) in Relau, which currently houses a stadium, an aquatic centre and a huge carpark as well.
To be built partially beneath the ground, the building is to have a basement car park and a green park on the roof top.
It is to be a 'green building'
Lim said the project was awarded to Eco Meridean Sdn Bhd based on the price, quality, world class building management and also because it would be a green building.
MPPP would bear RM50 million of the cost of the project while Eco Meridean Sdn Bhd, a subsidiary of SP Setia Bhd, would bear the remaining RM250 million.
The company would manage the place for 30 years under a Build-Operate-Transfer (BOT) scheme before transferring it to MPPP.
Teh accused the state government of breaching two laws and an MPPP guideline by allowing Eco-Meridean to build an additional 1,500 units of houses, which would go above the maximum permissible density, in other projects it proposes as part of the agreement for the sPICE project.
The laws are the 1976 Town and Country Planning Act and the 1976 Local Government Act, he added, saying that the breach would have far reaching implications on Penangites.
"Firstly, it is wrong for the state to breach the laws. It sets a bad precedent as in future, more developers will set terms and conditions to breach the laws. Also, the quality of life of the residents will be adversely affected," he added.
'sPICE to cost three times more'
Teh also said that the construction cost of RM300 million was three times higher than the the cost of building PICC, which is larger but cost only RM105 million.
On the other hand, he added, sPICE is merely a building within the compound of PICC, and until today, nobody knew details of its size or structure.
He also questioned why the company that had been given the contract to construct sPICE would be earning so much money - as much as RM530 million.
"Before construction starts, MPPP has to fork out RM50 million, including costs of repairing and refurbishing the existing buildings and lease a plot of land to the company to build a hotel," he said.
"Next, the company will make RM30 million when MPPP hands it to the company to operate for 30 years at RM1 million per annum . This income will go to the company," he added.
"Then, when the state allows the developer to build an additional 1,500 units of houses at RM300,000 a unit, the company will make RM450 million... the total of all this income is RM530 million," Teh said.
He then questioned if the Penang government was practising an open tender system for the controversial project and also why it was not awarded to a Penang-based company.
Teh called on the state government not to black out information on its sPICE project as this went against the grain of the FOI Bill that the state recently proposed to enact.
"Penangites have the right to know," he said, adding that the state should disclose all information, such as the drawings, terms and conditions of the proposals, before a project was announced to the public.

tunku : again project given without tender.i am sure there are many companies who are eligible and capable to do such project. lim guan eng should not give excuse that only eco meridean is capable. how much kick back eco meridean is giving to dap? dap is not a clean party like they portray they are. people should realize how dirty is dap.don't be fools penangites, don't vote for them again.
Posted by tunku at 12:00:00 AM

They can do whatever they want because they are DAP not UMNO.
DAP is clean. UMNO is dirty.

dap is as clean as shit