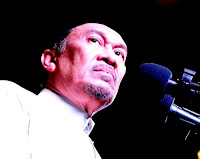 The Election Commission (EC) has deemed Parti Keadilan Rakyat advisor Datuk Seri Anwar Ibrahim's allegation that it did not carry out any improvement in the 13th General Election (GE13) as a big, blatant lie aimed at confusing the people.

He said the electoral rolls used in GE13 had been gazetted through a thorough cleaning process and online review of citizen record and latest voters' address in the data base of the National Registration Department.

"As the voter registration system uses the unique 12-digit of the identification card as registration identifier, therefore, it was impossible to obtain multiple registration in GE13 electoral rolls," he said in a statement here Friday.

He explained that through the registration system, non-citizens - whether they were from Bangladesh, Indonesia, China or India - could not register as additional voters.

Apart from that, Abdul Aziz said the electoral rolls used in GE13 had been verified, gazetted and finalised.

"It is impossible to enter additional voter name after a certain electoral roll has been gazetted for the election.

"As such, the allegation that 40,000 Bangladeshis were brought in to vote in GE13 was completely unfounded and slanderous after the electoral rolls were gazetted and finalised," he added.

In the general election, the EC also conducted early voting on April 30 which involved 235,826 police and armed forces staff and their spouses to replace the balloting process through the post for the group.

He said in line with the claims of opposition political parties and non-governmental organisations, the EC introduced the indelible ink in GE13 as an additional element to strengthen the balloting procedure to prevent any attempt by a party to vote twice.

Abdul Aziz said the primary basis of reviewing voter identity and the method to ensuring a voter did not vote more than once, was that the name list in the electoral rolls was used in each stream or voting place on polling day.

"If a person's name could not be found or has been deleted after voting, the voter could not vote more than once. This means multiple voters could not have happened in the balloting process of this country," he said.

Improvement was also seen from the aspect of campaign duration which saw the official campaign being fixed for 15 days from April 20, to last Sunday.
Posted by tunku at 7:00:00 AM