No muzakarah if Nik Aziz still around. 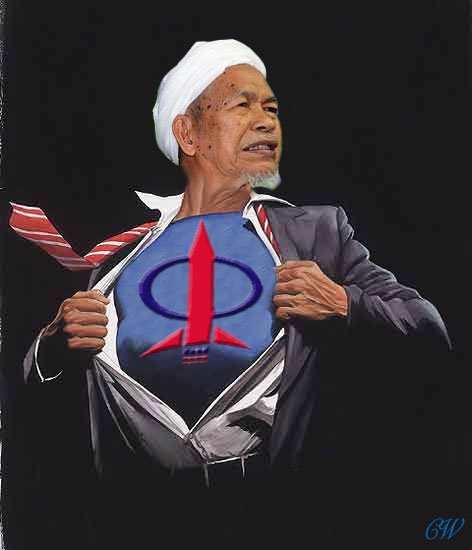 Don’t set preconditions if you are sincere, Mustapa tells PAS

PETALING JAYA: PAS should not set any preconditions if it is sincere about having a muzakarah (discussion) with Umno, said Kelantan Umno chief Datuk Seri Mustapa Mohamed.
“We welcome Nik Aziz’s readiness to have a unity dialogue with Umno but why did he put conditions even before the meeting is set. If it is for the betterment of the ummah (community) and Malaysians, all the conditions are secondary.
“Both parties should discuss with an open heart,” he said in Kota Baru yesterday.
PAS spiritual leader Datuk Nik Abdul Aziz Nik Mat had said that Umno must first change its nationalist policy to one that was Islam-based and to also accept PAS allies, PKR and DAP as partners.
In Jitra, former prime minister Tun Dr Mahathir Mohamad said the conditions set by Nik Aziz clearly showed that PAS was not sincere and not keen to have a dialogue with Umno.
“If they really wish to hold the talks with Umno, there is no need to impose conditions,” he added.
Dr Mahathir said it would be good for Umno and PAS to sit together to discuss ways to unite Muslims beyond political ideology.
Umno Youth chief Khairy Jamaluddin described PAS’ muzakarah invitation as a political game.
“PAS just wanted to flex its political muscle to show its power within Pakatan Rakyat.
“The message they want to send to the other Pakatan parties is that they can switch sides,” he said in his twitter account.
“Anwar (Opposition Leader) will panic and he certainly will be willing to allocate more seats to PAS,” he added.
Umno vice-president Datuk Seri Shafie Apdal said PAS leaders should have a muzakarah among themselves first before attempting to have a dialogue with others.
“Each leader in PAS has differing opinions on whether to have talks with Umno.
"Thus they should have their own discussions first before attempting to have talks with us,” he told reporters in Marang, Terengganu.
tunku : i have said it earlier that umno is wasting their time when it comes to this muzakarah issue. everytime this issue is brought up it leads to nothing as pas through nik aziz will set all sorts of condition for the muzakarah to be held. this evil old man is against the unity of islam. to him the craze for power is more important than islam. may be umno can held muzakarah with pas when he is not around any longer.till then umno, don't bother to comment on this issue.
Posted by tunku at 9:29:00 AM

Its ok let it be....many more will support BN for being humble.....HIDUP BN