Atmosphere at Ambiga’s house back to normal 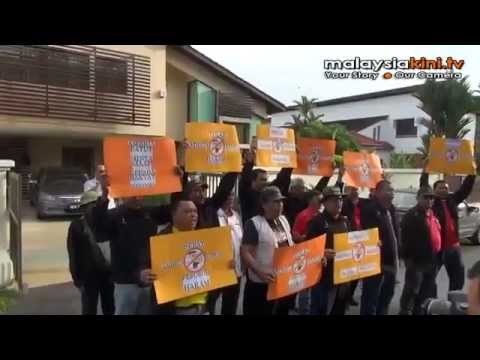 KUALA LUMPUR: The atmosphere in front of Datuk S. Ambiga’s house in Bukit Damansara here has returned to normal.
The burger stall and a group of hip gyrating ex-servicemen who performed the “butt exercise” in front of her house on Tuesday are gone and rumoured plans by a group to set up “pasar malam” stalls did not materialise.
The presence of Kuala Lumpur City Hall officers and police patrol cars may have deterred anyone from doing so.
A check at 4.30pm saw City Hall officers in two vehicles parked near Ambiga’s home, with police patrol cars making their rounds every 10 minutes.
Although Ambiga, who is Bersih co-chairperson, was not at home, several of her bodyguards were seen outside the porch entrance.
When approached, a City Hall officer at the scene said they were merely making their rounds to ensure that everything was fine.
“So far, everything has been normal since morning,” the officer said.
He said he was unaware of any plans to set up stalls there yesterday, although the Malaysia Small and Medium Entrepreneurs Alliance had threatened to do so on May 24 in retaliation to Ambiga organising the Bersih 3.0 rally on April 28, which they claimed had affected their business.
Brickfields OCPD ACP Wan Abdul Bari Wan Abdul Khalid said the police were merely on routine patrol in the area.
tunku :now she knows what others feels when she organize illegal gatherings in the city. this is just few people in front of her house and she's feeling threaten and uneasy. she said that these people are bullies. what about you ambiga, when you organize illegal gatherings in the city and you put others life at stake? did you ever think about it? i hope there will be people gathering in front of her house on daily basis.
Posted by tunku at 9:09:00 AM