Hasan can still be a thorn 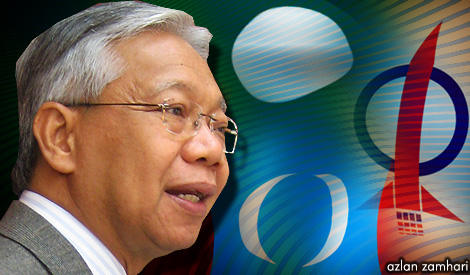 Datuk Dr Hasan Ali was a constant thorn in the side of the Selangor government and his party colleagues in PAS. Now that he is sacked, will he continue to torment the party?
AFTER months maybe years of agonising, PAS has finally bitten the bullet and summarily sacked its fiery former Selangor commissioner Datuk Dr Hasan Ali.
The maverick politician is accused of consistently pulling the party in a different direction, essentially to-wards an alliance on Malay unity with Umno.
PAS is taking a big gamble sacking Dr Hasan now and not earlier, when many Pakatan Rakyat colleagues had wanted the party to act against its wayward member.
Dr Hasan was a constant thorn on the side of the Selangor government and his own party colleagues.
He was seen as not being a team player, pushing hard his own Islamic agenda.
He feels strongly that Malays, who are divided three ways between Umno, PAS and PKR, should unite and form a big and unshakeable bloc in Parliament and the state assemblies.
Only then, he reasoned, can they defend the Malay interest, Islam and the institution of the Malay Rulers.
The problem is that not everybody agrees with him and PAS has to tolerate his many gaffes and intransigence ever since the Pakatan Rakyat coalition came to be formed in the aftermath of the March 2008 general election.
Within days, it was revealed that Dr Hasan was one of the PAS leaders who went behind the back of his PKR and DAP colleagues and others in PAS to seek a unity government with Umno.
From that time onwards, his relationship with his Pakatan allies soured, to the point he was removed as Selangor PAS commissioner last year to allegedly mitigate the damage done to the Pakatan partners and among PAS' multi-racial supporters.
But he continued to speak up and berate the PAS leadership that is dominated by the Erdogans or moderates, led by spiritual adviser Datuk Nik Aziz Nik Mat, for allegedly deviating from their Islamic path and charging that PAS was no longer an Islamic party.
The last straw was his call on PAS members to stay away from the rally in support of Datuk Seri Anwar Ibrahim at the Kuala Lumpur Courts Complex on Monday, ostensibly because it was a “personal moral issue” of Anwar.
A disgusted PKR deputy president Azmin Ali publicly demanded that PAS act against Dr Hasan for breaking Pakatan's agreed rules to stand by Anwar at any cost.
The party's central committee meeting on Sunday unanimously decided to sack the Gombak Setia assemblyman without recourse to asking him to answer disciplinary charges.
He is to be removed from the state exco, where he holds the portfolio for Islamic Affairs, Malay Custom, Infrastructure and Public Amenities.
His only recourse is to appeal to the party's Syura Council but it is not known, at this juncture, if Dr Hasan would do this.
He called a press conference at his Taman Tun Dr Ismail home on the day he was sacked and, along with Islamic scholars, continued to berate PAS for being ungrateful.
“I have defended Islam and the Malay race for 20 years and PAS rewards me with a sacking,” he told his audience, who included former PAS deputy president Nasarudin Mat Isa.
The question, now that Dr Hasan has been sacked, is how much damage he can do to the party and the Pakatan coalition.
Being a motivational speaker and articulate in expressing his views, can he turn his sacking into a momentum of grievances among Malay voters against his former party and deliver Selangor to Barisan Nasional in the upcoming general election?
Dr Hasan is viewed as a champion of the conservative bloc in the party and the Malay community and, as such, he is not easily rebuffed.
PAS has erred by not acting earlier against him and calling for a by-election in his state seat.
By delaying, the party had allow-ed him to grow and become powerful.
But it has finally put a stop to the runaway train by sacking Dr Hasan and seeking to remove him from the state exco but at what cost?

tunku : it is a blessing actually. now hasan can move freely and explain to the muslims especially in selangor and generally nationwide on what is wrong with pas and pkr. hasan can now tell all the dark secrets of pas,pkr, dap and of the state government. most of pas members are upset with the sack of hasan. pas had made a big mistake . before his sacking he was a small thorn but now he is much bigger thorn to pakatan now.