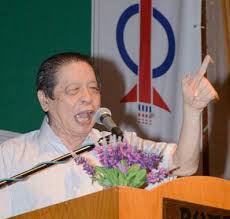 The fraud case in the DAP’s CEC election made its mark in Malaysia political history. As an opposition party who promotes transparency and always accusing the government as corrupted now can eats their own words. The DAP is now known as a hypocrite and liar.

Through this fraud incident, it is proven that the DAP is the most racist party ever existed in Malaysian political history. This is because investigation found out that the DAP intentionally did not send notices to 753 of its Indian members that is eligible to become a representative in the CEC. Other than that, a recount that was made right after the result has been tallied shows that there are manipulation from the leaders of the DAP to ensure that Zairil Khir Johari win a seat in the committee. This only happens because there are no representatives from the Malay community.

However, DAP’s action to cover up their racist nature through the appointment of Zairil Khir Johari has really shows their true colour as Zairil is not a Malay, but he is 100% Chinese. Why a Chinese is being considered as a Malay except the fact that the DAP is too racist and refuse to put Malays in the leadership of the party.

Not enough with the lying and cheating, DAP is now proven as a ruthless bunch of thugs when they oppose the ROS’s orders for the DAP to organize another election.

It is certain that the DAP is not ready to organize another election because it means that they have to invite the 753 Indians that has been left out in the previous CEC election. This also means that they have to prepare for any possibilities that Zairil will have the least amount of votes again, similar to what he received in the first count. This can also resulted into Guan Eng and his cronies is oust from the DAP.

To retain their position, the DAP’s will not fight for the rights of their own members that they themselves took. The DAP is willing to sack the 753 Indian members any time soon as long as there are no re-election. It is not impossible that that is what the DAP wants so that all of their members will understand that the DAP is for the Chinese and other races are only needed to cover up their racist agenda of the party. Thus, the Indians and the Malays do not have to contest any of the election in the CEC and they don’t have to attend the meeting. It is enough for them to be the DAP’s coolies and minions in order to gain Indian and Malay votes.

If the DAP is not a racist, gangster, dictator and ruthless, then what is the correct word to define them? It seems like the DAP leaders are the complete evil villains that are filled with hypocrisy, lying and shameless, a sad despicable excuse for a political party in Malaysia. They have no problem letting the world know that they cheated, as long as they are in power.

It is clear that the DAP is a party that does not have any human values and civil. Just imagine if this party becomes the leader of this country, the 14 days tragedy in Malaya will repeat itself, and there’s nothing we can do about it.
Posted by tunku at 5:41:00 PM

Firstly, the status of DAP CEC is questionable. Thus, how far is the legality or validity of CEC decisions so far? Secondly, quite a good numbers of the victimized representatives are indian members. Thus, where is Ambiga? Why is she not appear to fight the democracy, transparency in DAP? Thirdly, why those aggrieved DAP representatives not bring/ challenging DAP in the court???