BN Has Brought About Much Change For The Better, Says Najib 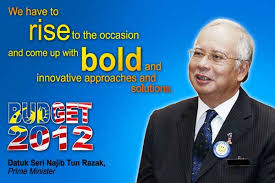 SIBU, Sept 16 (Bernama) -- Prime Minister Datuk Seri Najib Tun Razak said today Malaysia certainly welcomed change, but change that was well-structured, organised and systematic and not disorganised and chaotic.
"We want change that can bring a real change and real progress, not one that is disorganised and chaotic," he said at the ground-breaking for Sarawak's latest university, the Sarawak University College of Technology, at Old Airport Road, here.
Najib said there were people who preached about bringing change to the country with the next general election.
"Solely for the sake of winning votes, they will promise the people the sun, the moon and even the entire galaxy system.
"But, it is the Barisan Nasional government that has done so much in bringing about change, and even folks in our rural areas are enjoying the good change.
"We will do more for the future because it is a long-term process and cannot be done in a jiffy. We will deliver what we have promised," he said.
Najib said the government did not need any newcomer or any Johnny-come-lately to bring about change in the country.
He said that in Sarawak, for instance, the BN government had done very well because it had a real partnership between the federal and state levels.
"Our partnership works because we come from the same family and this will ensure our success.
"We want more development and 'penglikun' (security, in Iban) for a more comfortable and better life for the people," he said.
Touching on development in the field of education, he said the federal government had never rejected any request from the state government to set up more universities and institutions of higher learning.
"When I was the education minister, I approved requests from Chief Minister Tan Sri Abdul Taib Mahmud and his government to establish the Curtin University branch campus in Miri and then the Swinburne (University of Technology, Sarawak) in Kuching.
"Now, my successor Datuk Seri Mohd Khaled Nordin is giving the government approval for the setting up of this Sarawak University College of Technology," he said.
Najib said one of the critical success factors of a country or a state was the number of students who had been given quality education and equitable access to it.
He gave the assurance that the government would continue to develop, invest and improve on the country's education system as there were always many new fields coming up.
"We need to prepare them (the people) for jobs that are yet to exist," he said.

tunku : indeed there is much changes in BN compare during pak lah's tenure.BN now especially under the leadership of najib is doing lots of good changes for the country's future.we admit that BN is not perfect and make mistakes too sometimes but to deny BN is absolutely a wrong move.BN is much much better and far ahead from pakatan. pakatan with only four states under them can't even manage them properly and they are doing everything that they seems like championing against it.all the illegal activities, corruption, cronyism etc , you name it, they are involved in it.this is only their first term, imagine if they are there for a long time, just imagine the level of their illegal activities then.
Posted by tunku at 3:15:00 PM