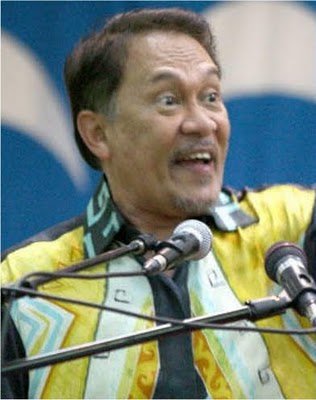 Cyber world went chaotic regarding Anwar's speech in Ampang where he kept on making sweet promises which are simply illogical. Reducing fuel price, abolish PTPTN and a lot of other promises which he can fulfil within 24 hours after he took over the government. He also promised that the media could ask just about anything to him, but Dato’ Seri Najib would 'have' get down from his throne, he said.
Anwar is saying as if he is in a fantasy world, in a made-up country. If Anwar is not kidding, he would have to be really stupid for thinking that it is very easy to reduce fuel price without even thinking of any decision of laws regarding the country's finance without even discussing about it.
Or perhaps he has really forgotten to 'share' with other friends such as Kit Siang and Hadi Awang and keep all of the power to himself. Hence, all decisions can be made personally without having to discuss anything.
But, what scares us more is when Anwar gave an exact time, 2.30pm to announce his success in taking over Putrajaya. He said,"By 2.30pm, I would contact Tan Sri SPR (EC), (and said) Tan Sri, I have gotten the result. I am giving you half hour to announce it in an orderly manner and transparent. if not, we would take swift actions against the EC,"
It is not wrong for us to doubt Anwar's sanity with the statement above. Anwar is no longer crazy for power but he is full on crazy. He began to think that his fantasy is a reality. Election result would only be released on 5pm earliest, how could he tell the future that he would win by 2.30pm?
Perhaps some might argue that it was just his pre-emptive statement to take over the power through a short-cut which is by tarnishing EC's credibility. But we cannot put aside the possibility that Anwar is not thinking wisely and what he said is not something pre-emptive but it is his fantasy.
Anwar is imagining himself becoming the Prime Minister after the GE but at the same time he knew that it is hard to reach. Thus, his imagination told him that he could just act like a Prime Minister, taking actions against EC and order Dato’ Seri Najib to back off.
Like a child imagining himself as a superhero, Anwar also imagined that he could do just about anything he wishes. Considering that imaginations are limitless, that is why Anwar could afford to make such sweet promises as he wish.
Whether we realize this or not, his words are now getting ridiculous. The more he talks, the more we could see that he talks without a sane mind.
His attitude of being anxious all the time and often express his rage towards pro-government media clearly shows his insanity.
Whatever it is, let us wait and see what would happen in the coming GE. Would his craziness get even more clear as the result is announced and it did not go as he wanted it to be? Or would he truly follow his imagination and ignore the law, rules and logic in announcing his success even before the voting process is finished?
Posted by tunku at 6:00:00 AM