Violence Is A Trend - PR Leader? 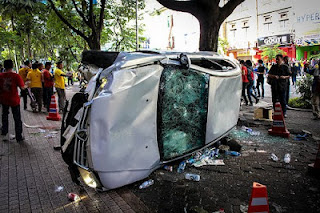 Writer truly respect a website, Suara PR for their 'advice' to Pakatan Rakyat. All these while, we have never seen pro-PR websites and blogs ever gave any 'advise' or even revealing mistakes of their leaders. All of them would keep on complimenting and defending whatever it is that was done by PR leaders in just about any forms including moral, law or even religion. In reality, in PR, whoever say something bad about leaders will be sacked. Perhaps because of that, no one really dare to be transparent as Suara PR.
Few of the latest articles in Suara PR that should be given attention would be the plan to bring down the government by violence like what included in Pakatan Rakyat's meeting minute.
Actually, such information is not shocking because we can predict the things that PR leaders talk about everyday. They knew that it is hard for them to win elections because they do not have the full support and trust that they needed.
That is why they need to tarnish the image of electoral system, raising hate to authorities and create disbelief on the court so that when they lose, they could put the blame on the EC, government and the court. It would then changed to a valid excuse to start riots to bring down the government through violence.
Quoting the blog,"That is why recently, Pakatan Rakyat leaders often give guarantee that if the transition of the government would happen in peace, but they never guarantee anything if things do not go their way. What is certain is that things would be peaceful if the transition happens." The meeting even mentioned that there might be bloodshed - if things turn desperate.
It seems like PR leaders are threatening us all that is we do not give them the win that they want in the coming GE, they would begin to cause chaos and bloodshed.
Once again, we would not be surprised if Anwar Ibrahim, Lim Kit Siang and Hadi Awang would sacrifice the life of their supporters to trigger chaos in this country.
Anwar is a man that would do just about anything but nothing that he does would shock us. Just imagine, even in regular situations he would do just about anything, just imagine how it would be if he is in a desperate need for power?
We also can never forget on how Lim Kit Siang triggered the May 13 tragedy, covered with hate on Malays, arrogance and raging evil instinct which runs in his blood.
The same thing goes to Hadi Awang who is fanatic and extreme. Those were the type of attitude which he had given to his supporters which led to the Memali and Sauk tragedy.
It is clear that bloodshed is not something new among PR leaders. And we are certain that they would not have any problem to repeat all that just so that they could get what they want. Their desire to take over Putrajaya is too strong that it cannot be stopped anymore.
For that, PR leaders see violence as the trend. And that the trend would help them to get to the peak of power. As a preparation towards that, they often gove signals to foreign medias that Malaysia is also heading over to such trend.
What writer could say here is that it would be stupid for Malaysians to destroy all of the things that we have and to sacrifice their lives just to follow PR leaders with their trend.
It is true, the fact that PR leaders often mention that rakyat have the power to determine the future of this country.
Thus, we need to remember that we have the power to push over leaders who would gamble our life just because they cannot wait to be in power. We have the power to not vote for them, hence, stopping them from destroying the country. Without our support, they would not be able to go anywhere...