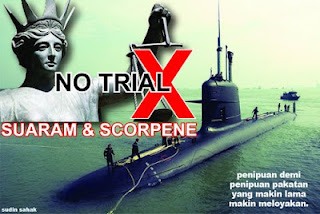 Once a liar, always a liar. That’s what SUARAM is.
SUARAM is determined to continue lying even though all their lies on scorpene submarines and Altantuya’s murder have been compromised. It looks like SUARAM is in too deep to get out of their own lies that the only way to go is further down till it hits rock-bottom.
We understand SUARAM’s needs to continue lying as the General Election is approaching but at least, SUARAM should have thought of a better lie or known when to stop before it gets out of control.
We know for a fact that SUARAM is losing control over its own lies when the lies became easier and easier to be detected, even sillier. For example, SUARAM is reportedly saying that they have pictures of Altantuya in France in 2007, which Malaysiakini is more than happy to help publish and spread it on the net.
But here’s the freaky part of the lie: Altantuya was murdered in 2006.
How could SUARAM have missed this important fact - the heart of all their lies?
SUARAM may even be a little panic in their effort to convince the people as their credibility is torn to pieces.
A French police investigation has revealed that a person named Altantuya Shaariibuu has never entered France from 1999 to 2006 which confirms that she was never involved in the negotiation of the purchase of the submarines either as an escort to any VIPs or as an interpreter as alleged by SUARAM. As the former DCNS Sales Manager to Malaysia, Mr. Fredric Faura confirmed, the negotiations were done in English and there was no need for an interpreter to be present at any time.
Maybe SUARAM is trying to challenge the authority to take action on them, with the hope that it could be used against the government to convince the people that the government has some dirty things to cover-up.
But the Malaysian government isn’t a fool and so are the French authorities – the judge, police and immigration officers.
The French would have detected Altantuya’s arrival should she have entered the country before her death. Unless, she was there after her death as claimed by SUARAM/Malaysiakini, the French might have missed her as she must have bypassed the immigration. It could be that she had flown there invincibly and appeared out of nowhere at the square in French and have someone took pictures of her and passed the picture to SUARAM and Malaysiakini, somehow.
I guess, SUARAM just have to sort this story out and come back to us with a better lie.
Many are interested to hear more from SUARAM as it is quite amusing to see how the lies are twisted, turned and flipped and then flopped on SUARAM’s face.
But rationally, we think that SUARAM should stop making a fool of themselves. Not that we pity SUARAM, but isn’t it about time that we let Altantuya rest in peace? Should what SUARAM said is true that there were fishy business going on in the submarine deals, then let the French judiciary figure it out. There is no need for cheap publicity over something that is under investigation.
Unless, there was nothing fishy about the deal and SUARAM just need the cheap publicity to gain some political mileage for the desperate Oppositions.

tunku : suaram is financed by "anwar". that is why they are all out to tarnish the image of the prime minister. although there is no evidence at all to hook the prime minister, they keep coming up with fairy tales to poison the people's mind. beware of this group.
Posted by tunku at 8:30:00 AM

cynthia cant you really checked the fact . You are the lawyer you should check the evidence anf fact .