Khalid Ibrahim says having sex with others is ok ! 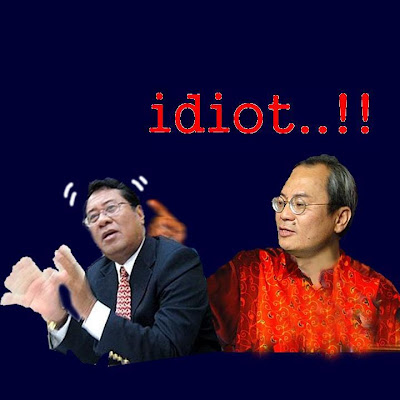 SHAH ALAM, March 21 (Bernama) -- Selangor Menteri Besar Tan Sri Abdul Khalid Ibrahim has described as a serious matter the emergence of a sex video purportedly implicating an opposition leader.
He said it would be a sad day for the country if there was no truth to the allegation because dirty politics had been used to tarnish a transparent administration.
Parti Keadilan Rakyat (PKR) advisor Datuk Seri Anwar Ibrahim had denied that he was the man in the sex video, revealed by an unidentified group led by one Datuk T, and that he was with his family at home and tweeting as well as surfing his Facebook account on Feb 21, the date that the video was said to have been recorded.
The group had alleged that it had a black-and-white video clip of a sexual act between an opposition leader and a woman said to be a prostitute at a hotel.
"In my opinion, dirty politics is an embarrassment. Give us enough space to do our job because it is for the good of all.
"While politicians must be clean in character, we also must give space to people and we cannot just all the time follow (them) even to the toilet. "There is the personal life and there is the political life," he told a news conference after attending a tea reception in appreciation of Selangor Technical Department officers, organised by SSIC Bhd here.
Meanwhile, Abdul Khalid praised the SSIC for raising its targeted RM10 billion in investment for Selangor last year, saying that the development reflected maturity in investment last year compared to 2009 and 2008.

tunku ; there's no denial about anwar's involvement in the video tape.what this moron khalid saying is, its ok to have sex with prostitute as it is the personal life of the politician.has he gone mad? is it ok for a politician to do so morally? furthermore he is a muslim. why when chua soi lek's video came out khalid did not mention all these craps??
Posted by tunku at 12:00:00 AM

What Khalid Gagap won't accept is when you become a PUBLIC figure -- more so if you're entrusted with precious taxpayers funds -- you cease to have a personal space. Every inch of your dick will literally examined by the public. And places where that dick has been will be tracked. That's the price you pay for the prestige of being in that upper echelons of society. You cant have your cake and eat it too.

media did not mention anwar's name,why did he jump upside down and called for press conference? is he really guilty? do not forget to pressure him to give his dna for the on going sodomy case.

im not sure bout the video..but last night i saw a news on tv..they already got the tape..we still not sure wether its Dato' Seri Anwar or not..just wait the court decision..if its anwar..he HAVE to step down..