Backbencher Hits Out At PAS Over Criticism 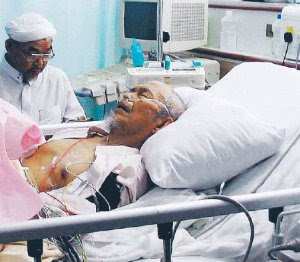 KUALA LUMPUR, March 14 (Bernama) -- A government backbencher today hit out at the PAS leadership for often criticising the Barisan Nasional for being in power too long.
Datuk Tajuddin Abdul Rahman (BN-Pasir Salak) asked whether PAS Spiritual Leader Datuk Nik Abdul Aziz Nik Mat was not long in power as the Kelantan menteri besar for 21 years.
Speaking during the debate on the motion of thanks for the royal address, he said PAS liked to point out alleged faults and politicised religion in the matter of efforts taken by the government for the benefit of the people.
He said PAS often said that people who voted for PAS would go to heaven but there was nothing about this in Islam.
Earlier, PAS President Datuk Seri Abdul Hadi Awang (PAS-Marang), in his speech, alleged that BN government leaders wanted to administer the country forever.
The house will sit again tomorrow.

tunku : bn to rule forever or not is up to the people to decide but for leaders to stay on forever is for them to decide. leaders like lim kit siang,karpal,nik aziz etc are the type that will never give up their post,hence they should look at themselves first before opening their stinking mouth.
Posted by tunku at 12:25:00 AM