Zaid Ibrahim: EGM will be held soon to dissolve Kita 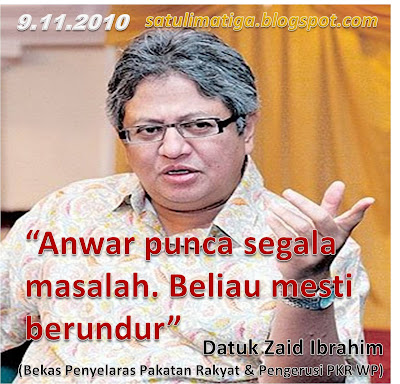 KUALA LUMPUR: Kita founder Datuk Zaid Ibrahim said in his blog on Thursday that an extraordinary general meeting would be held soon to dissolve the political party as it had failed in its aim of being a party that supported moderate and progressive ideas and brought civility and decorum to the political discourse.
He also said that he had been unable to raise enough funds to keep the party going.

Below is his blog posting:

An Extraordinary General Meeting will be held soon to dissolve KITA. This is necessary to remove any and all doubts that we indeed do support the Opposition, especially in light of some of our members in Kedah and Penang being openly critical of the Pakatan Rakyat. They have been doing this on a regular basis, making it clear that they are not interested in real issues affecting the country and merely want to embarass and ridicule the Opposition.
My idea to set up a political party that supports moderate and progressive ideas and brings civility and decorum to the political discourse has failed. I have not succeeded in bringing in enough members who are interested in democratic ideals, good governance and accountability amongst public officials . I have also not been able to raise sufficient funds to manage the party's activities, and friends who had promised to help have since decided otherwise.
The media's deep interest in the petty issues that affect the party is also indicative of the difficulties that we will continue to face. There are enough people out there who are just interested in criticising my leadership of KITA, and who manufacture stories to ridicule me.
The Malays have a proverb, jika sesat di penghujung jalan, kembalilah ka pangkal jalan. Essentially, it translates to: if you get lost along the way, go back to the beginning. I realise now that forming KITA was a mistake. I had hoped to provide alternative ideas in politics and to bring a wider diversity of talent to the Opposition's leadership. That has not happened. I have made many mistakes in my life but I am not disheartened. I remain convinced that change will come for the betterment of this country and I will do my part, again and again, to help achieve that. I will not waiver in my deep-seated belief that serving the public is good, and that we can carry out this service with honour and dignity.
To the genuine members of the party who are obviously unhappy with this decision, I seek your forgiveness. I appreciate your support and I hope you will accept this decision, for it is for the greater good of the Opposition. The survival of democracy depends on the viability of the Opposition. If it is destroyed as the Barisan Nasional is bent on doing then there can be no democarcy, no freedom and no moderate policies ever again.
tunku : the only main reason for zaid to dissolve Kita is because of money. although he is a multi millionaire(thanks to BN) he is not willing to sacrifice his wealth of his political agenda.the second reason would be there s hardly any support for this tiny party. it is just a frustration......thats all. that is why you can see his appearance in anwar's "shows" lately even though it's because of anwar he quits pkr and formed Kita. what a jerk.
Posted by tunku at 10:51:00 AM

With due respect to the others in Malaysia these politicians bastards with the Ibrahim father are all jerk, Khalid Ibrahim, Zaid Ibrahim .The guy with the name Anuar Ibrahim is the chief and master of all jerks

WITH DUE RESPECT NOT IBRAHIM ALI BECAUSE HIS FATHER IS ALI. HI!HI!