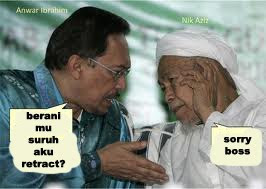 KOTA BAHARU, Feb 14 (Bernama) -- Kelantan Menteri Besar Datuk Nik Abdul Aziz Nik Mat has urged Opposition leader Datuk Seri Anwar Ibrahim to retract his purported statement that he (Anwar) supported all actions taken to safeguard the security of Israel.
Nik Aziz, who is also PAS spritual leader, said PAS' Ulama Council (Council of Relgious Elders) which met in Kuala Lumpur yesterday, decided that Anwar should retract the statement which was carried by The Wall Street Journal (WSJ).
"If The Wall Street Journal was inaccurate in reporting what he (Anwar) said, then we hope he will sue the newspaper," he told reporters after attending an event here Monday night.
Nik Aziz said he had sent a letter to this effect to Anwar.
"As friends, it is our duty to correct each other, and if see something not right with our friends, then we should tell them so and vice versa. This what Islam teaches us.
"So I have done my part as a friend and as PAS spiritual leader in asking him to retract his statement on Israel," said Nik Aziz.
In a separate statement, Nik Aziz said the security of an illegal state like Israel was not the responsibility of Arabs or Muslims at large because the state itself was formed on the back cruel policies.
He added that PAS was not in favour of the two-state solution to the Palestinian problem.

tunku : do you think anwar has the gut to sue the wall street journal? he don't even dare to sue ezam,dato T etc.he only dares to sue utusan, thats all. by right nik aziz should give an ultimatum to anwar, retract or we are out from pakatan, that is the way to do it. this is just another drama by nik aziz because of the pressure from the grassroots.
Posted by tunku at 10:46:00 AM