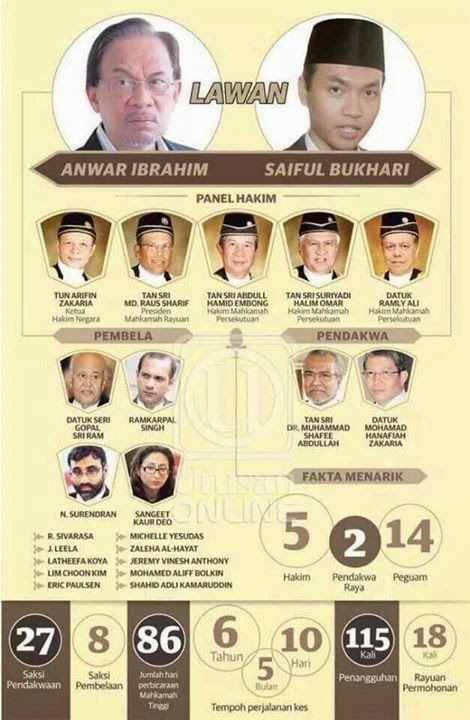 The trial judge was correct in dismissing impeachment proceedings against Mohd Saiful Bukhari Azlan, the Federal Court has held.

Chief Justice Arifin Zakaria, who leads a five-member panel of the Federal Court, held Tuesday that Mohd Saiful was a credible witness, and that the appellate court should be wary of disturbing the evaluation of the trial judge.

Justice Arifin further held that the DNA evidence taken from Anwar’s cell which was used to compare against samples of his semen were legally obtained.

The Court said that there was no break in the chain of evidence and no tampering.

Proceedings in Datuk Seri Anwar Ibrahim’s appeal against a sodomy conviction began 10.10am Tuesday with Justice Arifin Zakaria reading through a summary of the case.

The judge began by focussing on the issues of consent and whether or not there was evidence of penetration.

The Federal Court delivers its decision Tuesday in Anwar’s appeal.

The Opposition leader is charged with sodomising his former aide Mohd Saiful.

Anwar was sentenced to five years’ jail on Mar 7 last year by the Court of Appeal for sodomising his former aide Mohd Saiful, 30, at the Desa Damansara condominium in Bukit Damansara on June 26, 2008.

In its 85-page written judgment, the Court of Appeal overturned an earlier acquittal by the High Court.
Anwar had filed 35 grounds in his petition of appeal asking the Federal Court to overturn the Court of Appeal’s ruling.
Posted by tunku at 12:19:00 PM